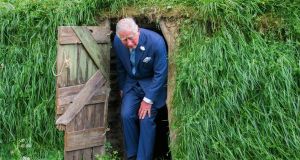 Prince Charles exits a model of a famine bothán during his visit to UCC. Photograph: Daragh Mc Sweeney/Provision. 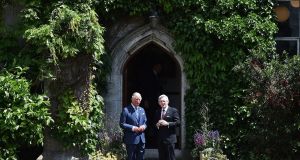 In the sunshine at University College Cork (UCC) Prince Charles laughs with entrepreneurs Fiona Edwards Murphy and Dr Padraig Whelan, who show him a beehive and some new technology they have developed - the ApisProtect which monitor apian health.

The prince seems to be having a great time, discussing beekeeping and his desire to make chestnut honey.

“He loves the bees,” says a journalistic colleague.

Within the college he speaks to Joanne O’Riordan, the disability rights activist, about her work and the technology in her wheelchair. He meets social entrepreneur Emily Duffy, who has devised a special sleeping bag for homeless people and Young Scientist of the Year Simon Meehan.

The prince is also gifted the sheet music of a harp composition created in his honour by Dr Fiachra Ó Corragáin . Not a fan of spicy food, he declines a sample from Rebel Chilli founder Paul Moore, but he asks where the name comes from.

“We’re called the rebel county,” says Moore, but he doesn’t, it seems, elaborate.

This trip goes to personal places. The prince is shown a page in the Great Book of Ireland written by Ted Hughes, the late poet laureate who once read him bedtime stories.

Then the veteran historian John A Murphy tells him the fraught history of UCC’s statue of his great great grandmother, Queen Victoria. Formerly buried in the president’s garden, it is now displayed openly without the once necessary bullet proof-glass.

“And looking all the better for it,” says Murphy.

The strangest and most moving stop on the UCC trip is the visit to the bothán, a replica of an overgrown, wattle and clay famine cottage sitting in the shadow of the stone buildings.

When he first thought of the idea of recreating such a dwelling, he worried it would be a bit “Darby O’Gill and the Little People”. In fact, he says, most people find it deeply moving. It really is deeply moving, though this is leavened slightly by some light media management.

There’s some concern people won’t get a clear photo of Prince Charles when he emerges from the cottage, so a press person asks Murphy to physically tackle the other dignitaries out of shot if necessary.

Prince Charles looks respectful and a little awed when he arrives to the bothán with UCC president Prof Patrick G O’Shea and Minister for Agriculture Michael Creed, though he does laugh when presented with a copy of The Atlas of the Irish Revolution.

Mike Murphy brings them inside the little house. They stay in there for what may have been a worryingly long time for his bodyguards, who were observed sporadically whispering into their cuffs all day.

The prince emerges to cameras clicking before looking around with a slightly befuddled air when no one immediately follows him. Murphy has clearly wrestled the others out of shot as planned.

It is, though, an oddly touching moment. What does Murphy feel about the symbolism of the heir to the British throne visiting a famine dwelling?

“It’s frightening,” he says. “But I also think it’s exciting and invigorating.”

Later still at the historic Haulbowline Naval Base in Cork Harbour, the prince receives honours from an Irish Navy honour guard. He inspects the troops, stopping to chat along the way, and he wows a class from St Brendan’s in Rathcoole, who present him with a hurley and sliotar in a glass display case.

He also becomes the first member of the royal family to board an Irish naval vessel, the William Butler Yeats.

Afterwards he meets the family of sailors crewing the Samuel Beckett, which is currently saving the lives of refugees in the Mediterranean.

Liz Butler tells him that her son David wanted to be in the army but that she preferred the navy.

“Mothers have a big influence,” he replies, speaking from great knowledge.

A little girl called Aisling Cross gives him flowers to give to Camilla.

“He said he’d pass them on,” says Aisling’s mother Fiona. “He was nicer than I thought he’d be. Really friendly. Very gentle, I think.”