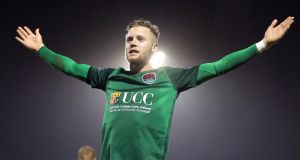 The former Republic of Ireland under-21 international validated his winning millionaire lottery ticket in his local supermarket in Castlebridge, Co Wexford, on Tuesday morning.

Having joined Preston North End just a few months ago, O’Connor returned home on Monday night having been informed of his win.

It was a lucky Christmas present for the former Cork City player, who had played a leading role in the Rebels’ league-and-cup double before joining the English Championship club.

O’Connor received the gift from his godfather, Peadar Murphy, who lives in Castlebridge, near Flanagan’s Centra Supermarket where he bought the winning ticket on December 14th last.

His uncle posted the ticket to Kevin with the Christmas message: “I wish you the best of luck”.

O’Connor visited Flanagan’s Supermarket on Tuesday where he was greeted by supermarket proprietor, Louis Flanagan, and members of staff, along with early morning customers.

“Once the ticket was validated I asked Kevin for a hold of it [the ticket] so I could become a millionaire for a few short seconds,” said Mr Flanagan.

“I was delighted for Kevin and his parents, Brian and Breda. One could not meet a nicer person or family. When he [Kevin] came into the supermarket along with his girlfriend it was the very same Kevin of old. He has not changed one bit. He is as nice a person as one could meet.

“Kevin got to where he is today the hard way. He played with Waterford before joining Cork City. He worked so hard to get that opportunity with Preston North End having also played with Ireland at underage level. If I was to pick a person to win I could not have done any better. It’s wonderful and with such a nice family I have still hope in this world,” he added.

Mr Flanagan said he could not believe it when contacted by the National Lottery. “I was out collecting vegetables when I took the call ... I asked if I had won the lotto and the response was swift: no not yourself but you sold the winning millionaire draw ticket.”

O’Connor collected his prize on Tuesday evening but will have little time to celebrate as he must return to Preston for preparations ahead of the side’s FA Cup tie against Wycombe Wanderers this weekend.

Earlier in his career O’Connor was also an excellent Gaelic football player having played underage for Wexford, for his local club Shelmaliers and St Peter’s College, Wexford.