Pressure on council to reallocate traffic lanes to cyclists and walkers 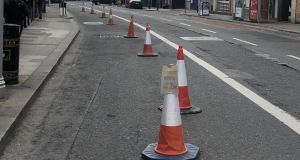 The council has removed traffic cones and signage placed by locals in Stoneybatter declaring a “temporary footpath” on Manor Street.

Dublin City Council has been urged to reallocate road space to allow pedestrians and cyclists maintain physical distancing and improve road safety during the coronavirus pandemic.

Community and campaign groups and local politicians are calling on the council to cordon off traffic lanes for pedestrians, and allocate additional space to cyclists, following similar safety initiatives in several European cities.

The council in recent days removed traffic cones and signage placed by locals in Stoneybatter declaring a “temporary footpath” on Manor Street, to increase the width of the narrow existing footpath to allow pedestrians to maintain a two metre distance while passing.

The council said the cones were removed “as they were put out in such a way as to cause a hazard and had already been reported to the gardaí”.

However, several groups have said similar measures need to be implemented across the city by the council itself. Dublin Cycling Campaign spokesman Kieran Ryan said few footpaths in the city were wide enough to maintain distancing protocols.

“If a footpath is narrower than three metres in width, there really isn’t enough space for people to physically distance from others without stepping into the road or a cycle path, and very few of our footpaths would have that type of width available.”

There was, he added, a “natural encroachment” happening of walkers and joggers stepping into the road or cycle lanes and cyclists moving out of cycle lanes further into the road, but this needed to be formalised by the council with temporary barriers and markings to ensure everyone’s safety.

“In Berlin they have just doubled their cycle lanes, the German government has been pushing cycling as an alternative to public transport particularly for key workers. Even in New York there are new pop up bike lanes.”

While cars did not require the road space they previously occupied, a consequence of less traffic has been motorists driving at higher speeds than normal, he said.

This concern was echoed by Kevin Carter, chairman of the Dublin Commuter Coalition. “Our concern would primarily be for the safety of pedestrians, not just because we want people to be able to socially distance, but because the risk of an RTA [road traffic accident] must be kept to an absolute minimum to keep people out of hospital at this time when our health system needs all the capacity it can get.”

Green Party councillor Donna Cooney had already asked the council to increase pavement width by “taking some space from roads that are much emptier”. In response council officials said they “have not identified any areas where additional measures to ensure social distancing are needed”.

However they said they were monitoring the a situation “and if there is a requirement for us to take additional measures then we will do so”.

All 10 green party councillors have now written to the council management seeking measures including cones to widen footpaths in town/village centres or outside busy shops/queue areas. Cones or bollards to create “quietways” to stop through traffic in housing estates and make roads for play/exercise. “Repurposing” of traffic lanes to cycle lanes. Temporary road pedestrianisations, signs indicating improved pedestrian priority at junctions, and reducing risk of transmission via crossing buttons.