Why do people spread the 5G conspiracy theory?

After an online backlash Eamonn Holmes has apologised for suggesting that it may “suit the state narrative” to dismiss false claims linking 5G telecoms and coronavirus. Video: ITV/ This Morning 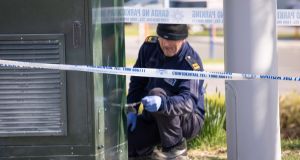 Garda forensics officer at the scene of the fire at a telecommunications mast near Letterkenny hospital. Photograph: North West Newspix

What do problem gamblers and conspiracy theorists have in common? Both groups believe they can spot patterns in the chaos.

For gamblers that can mean believing that because the roulette wheel landed on an even number the last three times, it is sure to do so this time. For those who subscribe to conspiracy theories, it’s believing that autism diagnoses started to increase roughly around the time the MMR vaccine was introduced and therefore one must cause the other.

There is even a word for it, apophenia; defined as the tendency to perceive connections between unrelated things.

The conspiracy theory currently in circulation that the coronavirus is caused or spread by 5G technology is a classic example. The basic theory goes that because telecom companies began installing 5G technology last year and because that is when coronavirus first appeared in China, 5G causes coronavirus. A variation states Government is over-hyping coronavirus so they can keep everyone inside while 5G masts are installed.

The theories do not stand up to even the slightest scrutiny and have been refuted by many international bodies including the World Health Organisation (WHO). The fact that many countries without 5G technology have been deeply affected by coronavirus is usually ignored by proponents of the theory.

This hasn’t stopped the conspiracy theory spreading like wildfire on social media in the UK and now in Ireland.

Now it is starting to have real world consequences. Two mobile phone masts were set on fire, apparently deliberately, in Donegal on Sunday night. The masts were actually 4G infrastructure which were being upgraded to provide extra coverage to Letterkenny General Hospital and the surrounding areas.

The arsonists were seemingly following in the footsteps of their co-conspiracy theorists in the UK where there have been dozens of incidents of vandalism, arson and harassment of telecoms workers. Incidents have been reported in the Netherlands and elsewhere.

Mentions of a link between coronavirus and 5G have increased dramatically on Irish social media in recent weeks, according to Dr Eileen Culloty of Dublin City University(DCU).

Dr Culloty, who studies disinformation with a team at the DCU Future of Journalism Institute, said there were very few mentions of the conspiracy theory online before mid-March. This changed when a prominent Irish far-right conspiracy theorist started posting videos on what they called the “Corona charade” or the “scamdemic”. In one video they stated ventilators should not be used for Covid-19 patients “because it’s probably wi-fi poisoning”.

The Communications Regulator says it has started receiving queries about the supposed link between 5G and the virus and has urged people to only rely on information about 5G from reputable sources.

Some of versions of the theory are so bizarre it is hard to tell if they are jokes. For example, one message spreading around WhatsApp states the public applause for healthcare workers was scheduled to drown out the buzz of 5G networks being tested.

“Some people are making fun of the conspiracy theories,” says Dr Culloty. “It’s hard to tell who genuinely believes it and who is just sharing it because they think it’s hilarious.”

In many ways, the spread of misinformation around coronavirus should not come as a surprise. From the JFK assassination and 9/11, major public traumas and conspiracy theories have always gone hand in hand.

“Whenever there is a huge event people people want a big dramatic explanation for it. It’s not enough that Princess Diana died in a car accident. There has to be some explanation that matches the upheaval or trauma that people feel,” says Culloty.

In both the UK and Ireland celebrities play major a role in spreading misinformation. Musician Jim Corr regularly posts bizarre theories about coronavirus and 5G while singer Damian Dempsey said last month the technology will “fry our brains” and “make us like zombies”.

In the UK, television star Amanda Holden received criticism for tweeting a link to a petition linking 5G and coronavirus (she later said it was an accident). The co-host of ITV’s This Morning programme Eamonn Holmes has suggested that it may “suit the state narrative” to dismiss false claims linking 5G telecoms and coronavirus.

“The 5G conspiracy has been around for years, mostly within conspiracy networks. But now it’s just hitting mainstream,” says Culloty.

In Ireland many of the conspiracy theories are promulgated by the far-right but Dr Culloty says this is not universal. People susceptible to believing in these theories come from all sides of the political spectrum and all sectors of society, including intelligent or highly educated people.

While some people spread conspiracy theories to become famous or make money, others earnestly believe they are performing a public service by claiming vaccines cause autism or 5G causes coronavirus, says Culloty.