President Michael D. Higgins has released photographs and video of his new dog Misneach, which translates to "courage", the latest addition to Áras an Uachtaráin. Video: President of Ireland 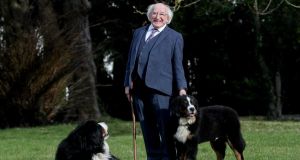 President Michael D Higgins has released photos of his new dog Misneach, the latest addition to Áras an Uachtaráin. A spokesman for the President said the Irish name translates to “courage”, a reflection of the times.

While never a replacement, the five-month Bernese Mountain Dog arrived shortly after the death of Síoda, one of a well known pair of Bernese at the presidential residence alongside Bród.

Both had appeared prominently in photographs with global dignitaries and world leaders on visits to Ireland.

President Higgins has had dogs all his life, including a previous Bernese during his earlier years in the Phoenix Park called Shadow.

Clearly his preferred breed, it is known as a family favourite and traditionally a farm dog.

According to the Irish Kennel Club, the Bernese followed other Swiss Mountain Dogs in becoming appreciated across Switzerland and parts of Germany.

“Today the Bernese Mountain Dog is well known and appreciated all over the world as a family dog thanks to its striking tricoloured coat and its great adaptability.”

Speaking about his beloved animals previously, Mr Higgins said “the dogs are not merely ice-breakers, they’re also a great source of wisdom.”

He is not alone in his appreciation. From Queen Elizabeth’s corgis to Joe Biden’s German Shepherds, and even Vladimir Putin’s Japanese Akita, leaders and heads of state the world over are commonly found among man’s best friends.