Reports of valuable goods being left outside, getting lost or being eaten by the dog abound 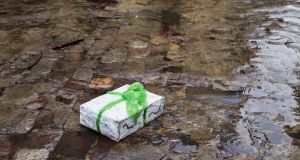 A recent social media query about issues people have had with online orders prompted about 1,000 responses in less than 48 hours. Photograph: iStock

With successive lockdowns pushing more people towards online shopping, delivery companies are dealing with volumes that have doubled in a year, and some are clearly struggling to deliver the goods.

Dogs shredding clothes in gardens, high-end technology left unguarded on doorsteps, books left in the rain and long-awaited parcels dumped in wheelie bins by couriers are just some of the horror stories told by people who have seen their online orders go awry.

And those telling the stories are probably the lucky ones, because for every person who has successfully retrieved a parcel from a hungry golden retriever or fished it from a bin or found it untouched at their front door, there are more whose goods have simply disappeared.

A recent social media query from The Irish Times about issues people have had with online orders prompted about 1,000 responses in less than 48 hours.

Conan Traynor had a brand new pair of runners thrown over the side gate by DPD, which his dog promptly destroyed. “I’m here all day so they didn’t even ring. Called them and person I got through to couldn’t have been more dismissive.”

Laura O’Dea also had an online order ruined by an overly enthusiastic mutt. “Our postman left packages in reach of our German shepherd – the contents of an Asos order were found scattered across the garden!”

Natasha Donovan “waited all day for a DPD delivery, kept my phone on me. Next thing the doorbell rings and next door’s kid drops my package.” It had been left on the child’s doorstep and was only found when she went out to play.

“Fastway left a laptop outside my door, thankfully in a nondescript box,” says Andrew Eager. “How many hours it was there on the doorstep of a house with an open-plan garden is anybody’s guess.”

“This week I had two parcels dropped over the electric gate in torrential rain by Fastway,” says Lynn Sheehy. ” The next delivery guy actually rang the buzzer so when I opened the gate the two soaked parcels got squashed.”

Carol Fanning had a package left in her recycling bin, which was full and was subsequently collected before she got the chance to retrieve her online order.

Neil MacDiarmada, meanwhile, was less than pleased when a courier left a box with a new €400 phone he had bought for his wife “on the roof of a car, on a wet day, at a neighbour’s house 300m up the road. Luckily the neighbour spotted it.”

Rachel Howe said her husband had arranged for a defibrillator to be delivered to their home for a community group he was involved with. “Fastway left it on the pillar; it was worth about €1200! Madness.”

Brendan Moynihan had a delivery from the same courier dropped to the garage of the unoccupied house next to his, while Áine Dempsey had one left “in a house around the corner’s green bin and, because she was lovely, she rang me and told me. The number was on docket. I had no idea. Full of gifts for Christmas!”

And then there is Mélanie O’Donovan, who says misplaced deliveries have “literally become a weekly occurrence”.

A book parcel for her was left in front of the door in the rain, while photos were pushed under a wheelie bin. Parcels were also delivered to the brambles close to her house and into the coal bunker.

“I caught one guy throwing it out of the van window on to the roof of the dog kennel,” she says.

Then there was the time a parcel was left on the ground outside her house, much to the delight of a puppy, who ate it. “I’m literally at home all day every day and there isn’t even an attempt to knock or anything. All I ask is for the beep of the horn. I’ll come out and they won’t even have to get out of the van,” she says.

An Post stoutly denies it would ever leave a parcel anywhere unless a customer “has expressly instructed us to leave an item in a specified ‘safe place’ of their choosing” or with a neighbour”.

Spokeswoman Anna McHugh says it is An Post policy “to ensure the item is delivered to the intended addressee or a representative of the addressee”.

She says the rules state a package “must be set down at the delivery point and contact made with the addressee from a safe distance”, and if there is no reply at an address and if a customer “has not specified that the item be left in their choice of a ‘safe place’, a leaflet is left showing details of where and when the item can be collected – on production of ID”.

McHugh says “shabby service lets everyone down, and given all An Post staff have done for communities, and in keeping Ireland trading during Covid, shabby service is just not acceptable.”

Caroline Cannon, marketing manager at Fastway, says it is not company policy “to leave parcels in a public space near the customer’s home” and that it operates both a proof of delivery (POD) and an authorised to leave (ATL) policy, as determined by its customers.

She says high-value items generally require a signed POD with the protocol involving the parcel being left at the front door “while interacting with the customer in a safe and socially distant environment”.

She says ATL parcels must be left in a clean, dry and secure location and a “calling card must be left, confirming where the parcel has been left, along with the courier’s contact details”.

But who pays the price if a parcel goes missing or arrives in a dishevelled or destroyed state? According to the Consumer Association of Ireland, the “key in these scenarios is to work out where the responsibility for the lost or damaged item lies”.

Under EU law retailers are responsible for products until they are handed to the consumer, and if it organises a particular courier service to handle delivery, then the retailer bears responsibility for the goods while the courier is in possession of them, and it is the retailer that needs to replace a item or refund the payment if the goods go missing or are damaged.