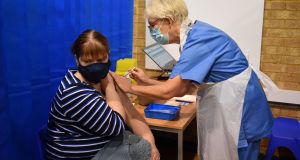 The Government is considering a push for an improved system of sharing unused vaccines in the EU. File photograph: Justin Tallis/PA Wire

The Taoiseach, Micheál Martin, has admitted meeting the target of issuing 1.25 million Covid-19 vaccine doses by the end of March is proving “very challenging” as the Government considers a push for an improved system of sharing unused vaccines in the EU.

According to sources with knowledge of the situation, Ireland will be part of a group of member states likely to write to the European Commission next week, arguing for a formalised redistribution mechanism to kick in when a surplus of vaccines accumulates in a member state.

Alongside Ireland, Denmark, Lithuania, Latvia and Estonia are likely to be signatories to the letter, to be signed by Minister for Health Stephen Donnelly, sources said. The countries will likely argue that such an approach would foster solidarity, and would be especially relevant where there is a risk of vaccines going out of date.

Despite the push for a formalised system to redistribute spare vaccines, Government figures dismissed the suggestion that there may be any immediate dividend for the State’s supplies.

Senior sources said that contact had been made with many countries and companies already, to no avail so far. Meanwhile, speaking in Galway, Mr Martin said that Germany had “made it very clear to us that they’ll be using all [their] vaccines”.

“We made those queries and they’re very clear,” he said. Efforts to secure extra vaccines through so-called “vaccine bazaars”, where European countries offer up spare doses, have had limited success. The Department of Health confirmed Ireland requested two million doses through this channel, but received only 138,000. Such channels are now little used as most countries are taking their full allocations.

A Government spokesman said that delivery dates from AstraZeneca have moved three times since Mr Martin set the target, and 23 times in total.

There is significant and ongoing concern in Government over the reliability of deliveries from AstraZeneca. Delivery figures for February were less than half of that anticipated in the Government’s plan for managing the pandemic.

Ireland has so far administered 8.8 doses per 100 people, placing us mid-table in the EU.

It is expected that the State will have shortly administered half a million doses, but figures distributed to Ministers suggest that only about 84,000 doses will be given in the week beginning March 8th. This suggests a rapid acceleration of supply and administration would be needed in order to hit the end-of-March target, with just over half the 1.25 million figure only likely to be reached by mid-March.

There is ongoing pressure on the Government to ramp up vaccination, from the Opposition and from its own backbenchers. Kildare North TD James Lawless sent a memo to the Taoiseach on Friday, calling on him to negotiate any spare doses with the UK, as well as to get Johnson & Johnson’s vaccine in place ahead of European Medicines Agency approval. He also said consideration should be given to “going beyond the [EU] bloc procurement” and also examining whether Russia can supply doses of its Sputnik V vaccine “in a useful timescale”.

He said it was imperative to “provide light at the end of the tunnel” to maintain public confidence and buy-in for ongoing restrictions.

David Cullinane, the Sinn Féin health spokesman, said that “it is important that targets set are targets met”, and called on Mr Donnelly to be “more hands-on, proactive and stand up for Irish interests”.

A spokesman for Mr Donnelly said “the reality with AstraZeneca is that supplies haven’t come in as expected and this is proving to be challenging. At this point we can’t say what the out-turn will be for the month, but everything we receive, we will administer.”