Higgins says many people have experienced the mission’s ‘warm embrace’ 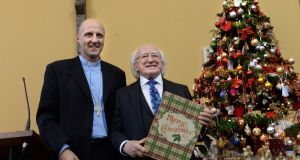 The work of the Dublin Central Mission was praised by President Michael D Higgins during a visit there on Tuesday.

Founded in 1893, the Abbey Street-based mission is an agency of the Methodist Church in Ireland, and, apart from a place of worship, it provides a base for many community and self-help groups. Its congregation is drawn from more than 20 countries.

“There are many voices in our society, not just those with power. For instance, there are the voices seeking basic needs such as food and shelter.”

Mr Higgins contrasted the lot of people seeking those things with those engaged in an insatiable pursuit of wealth and the mark of celebrity.

“There are many people addicted to acquiring ever more wealth. They should pause and reflect that it is much better to be living among people rather than numbers.’’

Welcoming the President to the mission, Rev Dr Laurence Graham, president of the Methodist Church in Ireland, thanked him for his interest, and for meeting his commitment to pay a visit to the mission.

He said that for more than 120 years the Methodist people of Dublin had, through the mission’s work, provided shelter, support and care to the most vulnerable in the city. People battling addiction attended one of 17 different 12-step self-help groups. Four evenings a week 30 volunteers took turns in providing food, clothing and friendship to homeless people.

He said its work also included the provision of independent living facilities in two sheltered housing complexes in Sandymount and Glenageary in Dublin.