President must decide on Bill by Wednesday 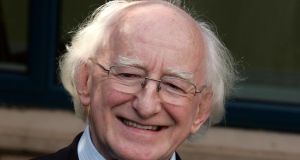 President Higgins: seven individuals on the council are chosen by the President

Final preparations were under way at Áras an Uachtaráin last night for the first meeting of the Council of State since President Michael D Higgins came to office.

Under article 26 of the Constitution the President is entitled to refer the Bill to the Supreme Court after consultation with the Council of State. He has seven days to decide on referral, which means the deadline for a decision on the Protection of Life During Pregnancy Bill will fall on Wednesday.

The council has a wide membership of current and former senior office-holders as well as seven individuals chosen by the President .

Chief Justice Susan Denham and president of the High Court Nicholas Kearns will also be in attendance, while former chief justices John Murray (a member of the current Supreme Court), Ronan Keane and Thomas Finlay also have seats on the council.

Former taoisigh Liam Cosgrave, Albert Reynolds, John Bruton, Bertie Ahern and Brian Cowen have been invited, as have the ceann comhairle of the Dáil Seán Barrett and cathaoirleach of the Seanad Paddy Burke.