Jesuit priest, who has died aged 91, remembered for his intellect, ‘positivity and compassion’ 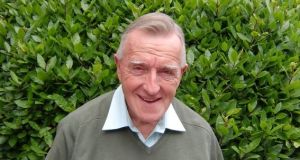 The death of the Tullamore-born priest at the age of 91 was announced by the Jesuit order, of which he was a member, on Friday.

Fr Kelly came to prominence for his expertise on the Aids pandemic in Africa and the need for education, which he called the “social vaccine”, to stem its spread.

“It is with deep sadness that I learned of the death of Fr Michael Kelly in his adopted home of Zambia,” President Higgins said in a statement.

“As an academic, writer and educator, Fr. Michael made an immense contribution to improved health outcomes for many people in Sub-Saharan Africa. Through his work with Irish Aid and several multilateral organisations, he was an inspirational figure to health workers, aid workers, humanitarians and diplomats from Ireland, Zambia and beyond.”

The President paid tribute to Fr Kelly’s intellect, as well as his “extraordinary positivity and compassion.

“He epitomised the great work of Irish missionaries in the education and health spheres in so many parts of the world. His humanity shone through in his work and in his encounters with all who were fortunate enough to have met him.”

Fr Kelly moved to Zambia in the 1970s. He lived and worked in Africa for over 50 years where he served in various education roles, including as headmaster of Canislius College and as Pro Vice-Chancellor of the University of Zambia.

He earned a reputation as a knowledgeable and forthright speaker on HIV and Aids. A graduate in Maths and Science from UCD, he became known for his scientific examinations of the virus and its associated social problems.

“Being mathematical, I have a kind of analytic mind, and could analyse the way it was going,” he once said.

Unusually for the clergy, he supported the use of condoms to stem the spread of the disease.

Fr Kelly was also active human rights campaigner, researcher and author. He wrote 15 books and worked as a consultant for organisations such as the World Bank, Unesco, Unicef and Irish Aid.

Minister for Foreign Affairs Simon Coveney said he was very sorry to hear for Fr Kelly’s death, whose work, he said, was “inspirational”.

“He leaves a legacy of achievement, driving policy changes not just in Zambia but on the international stage,” the minister said.

“Among those inspired by Father Michael were those generations of Irish officials who have worked in the Embassy of Ireland in Zambia since it opened in 1980, and who today also feel his loss.”

In 2012, Fr Kelly received the President’s Award for the Irish Abroad and last year An Post issued a stamp in his honour as part of their Irish Abroad series.

“This event will serve as a reminder of the outstanding work and rich legacy of Fr Michael Kelly. I offer my condolences to his family and many friends. Ireland and Zambia mourn the loss of a true hero,” President Higgins said.