Portuguese man o’war on its way to Irish shores 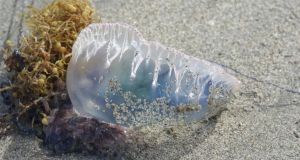 The infamous Portuguese man o’war and other nasty species of jellyfish are expected to soon arrive on Irish shores.

While they haven’t been spotted yet this summer due to the wet and windy weather, recent conditions mean we’ll soon “certainly have sightings”, according to John Leech of Irish Water Safety (IWS).

“We had low pressure on Saturday, Sunday and Monday, but now it seems to be settling. They sail on the surface of the water and will be carried by the southwesterly breeze up from the tropics,” said Mr Leech.

Mr Leech also made note of seagulls as a new threat for swimmers.

“I’ll be honest, it is a new phenomenon, but the reality is we have more seagulls now than at any time before in the history of the State.

“It wouldn’t surprise me if we got more attacks. We’re not the first place in the world for it to happen,” he said.

Due to their high population levels, an increase in competition for food has occurred, driving more seagulls inland and leading to unusual behaviour.

The recent attack of a swimmer in the sea at Fenit in Co Kerry where a seagull drew blood was used by Mr Leech as an example of the growing competition for food.

“It saw somebody’s head in the water and got so excited in competition that it thought the person’s head was food. It was a case of mistaken identity,” he said.

The IWS recommends that, should somebody be stung by a jellyfish, rinsing the area with salt water and applying a dry cold pack to it is the most effective treatment.

The IWS says that if the sting causes anything more than mild discomfort, medical attention should be sought.