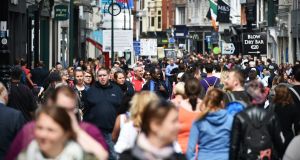 The lowest projection from the CSO would see the population increase to 5.6 million over the next 35 years

Ireland’s population could grow to 6.7 million over the next 35 years, new projections from the Central Statistics Office (CSO) show.

The CSO have mapped several projections for how Ireland’s population will grow between now and 2051, based on varying inward migration levels and fertility rates.

The population is expected to reach five million by 2021 across most of the projections, up from 4.74 million currently.

If fertility rates do not decrease, and inward migration levels reach 30,000 people a year, the population will grow to 6.7 million by 2051.

Models based on inward migration figures of 20,000 and declining fertility rates, predict the population would increase to about six million.

The lowest projection from the CSO would see the population increase to 5.6 million over the next 35 years.

The report says in projections of larger population growth, high levels of migration into Ireland play the biggest factor.

The birth rate is expected to dip significantly around 2030, because of a drop in the number of women who will be of childbearing age. This is due to the low number of overall births between 1986 and 2006.

The lowest projection for immigration has 10,000 people a year moving to Ireland, with 30,000 a year the highest expected level, the CSO report details.

The report also estimated the number of primary school age children would increase by between 7,400 and 13,900 over the next four years.

Over the next decade, the number of secondary school children will increase by between 75,700 and 67,200, the report said.

But from 2026 and 2051, the numbers of secondary school age children will fall. One population model predicts the amount of children aged between 13 and 18 will dip by 6,000 over the period. Another estimate, based on low inward migration and a declining birth rate, say it could decrease dramatically by 106,900.