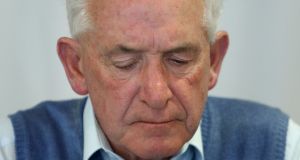 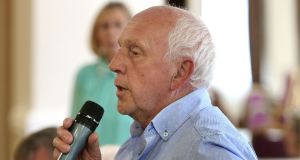 P J Haverty, a survivor of the Tuam mother and baby home, described his unsuccessful efforts to try to arrange to meet the Pope, at the meeting. Photograph: Joe O’Shaughnessy 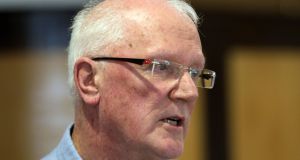 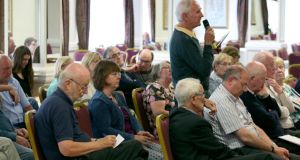 Some of the attendees of the Association of Catholic Priests’ public regional meeting in Tuam, Co Galway. Photograph: Joe O’Shaughnessy

Pope Francis has been urged to avoid being “treated like a celebrity”, and to apologise to all those mistreated in the Magdalene laundries, mother and baby homes and industrial schools when he visits Ireland next month.

A public consultation hosted by the Association of Catholic Priests (ACP) in Tuam, Co Galway, also heard calls for him to address the fact that families perceive the church to be an “all men’s club” which fails to recognise the role of women.

Competing with the World Cup semi-final on Wednesday evening, the forum, chaired by Fr Brendan Hoban at the Ard Rí hotel on the theme “What do we need to say to Pope Francis about the Irish church?”, attracted about 60-70 people from Galway, Mayo, Sligo and Clare.

It was the second in a series of four sessions which the association is holding this month – the first having been held in Mallow, Co Cork last week – and the ACP’s plan is to forward submissions to the Pope via the Papal Nuncio.

Redemptorist priest Fr Tony Flannery, who has been banned from public ministry by the Vatican, acknowledged that the meeting was competing with fine weather and events in Russia.

Shortly before he issued an update on the World Cup score, there were hoots and cheers outside as under-12 footballers from Caherlistrane arrived victorious from beating Tuam in a county final.

The absence of young people from Catholic Church congregations was a theme raised by several speakers.

“There’s a lot of anger in Ireland, and a lot of tough stuff has gone on here in this town and that’s one of the things the Pope might be asked to address when he is here,” a man from Sligo said, referring to the Tuam mother and baby home and the work of historian Catherine Corless.

One of the Tuam home survivors, P J Haverty of Menlough, described his unsuccessful efforts to try to arrange to meet the Pope.

“I’d just want to tell him how I am a survivor, tell him about my late mother, and ask him to apologise to all of us, and to those who were in the Magdalene laundries and industrial schools,” Mr Haverty said.

Monica Morley from Castlebar, Co Mayo, who works in Knock, noted that Pope Francis was attending the World Meeting of Families on his visit, and yet families perceived it to be an “all men’s club”.

Ms Morley said it would be important for Pope Francis to “get the gestures right” and to reach out to the marginalised and avoid being “hijacked”.

“I just hope he doesn’t become a celebrity who everyone wants to touch,” she said. “If I’ve been asked once, I’ve been asked 10,000 times for tickets to his visit to Knock, and not all the requests were from regular church-goers,” she said.

The Pope’s “55 minutes in Knock” was a “wasted gesture”, Des Kelly said, suggesting the pontiff should “take up former president Mary McAleese’s challenge and go to the North”.

Marie Morrissey from Co Galway noted that there was no bishop at the meeting, and no representative had been sent. Bishops were “very aware”of their “total lack of engagement” with both priests and the laity, she said.

In his remarks to the meeting, Fr Hoban said that in a “time of crisis”, people and priests had earned the right to offer “whatever wisdom we have”.

“We know the kind of church Pope Francis wants: the church of the second Vatican Council; open to the world, a people’s church where decisions are made by people, priests and bishops, debating together and agreeing on what needs to be done,” he said.

“The leadership of our church doesn’t encourage us to say what we think,” Fr Hoban said.

We lived in “strange times”, as the Pope and the people “are now thinking along the same lines”, Fr Hoban noted.