Theresa May and Donald Trump rate poorly among Irish people, according to new poll 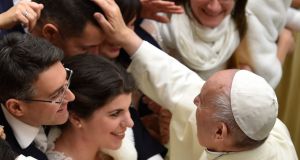 The pope was viewed favourably by 70 per cent of the Irish respondents to the poll and unfavourably by 21 per cent.

Mr Trump polls an 82 per cent unfavourable rating, with just 13 per cent looking on him in a positive light. More than two-thirds of respondents (68 per cent) viewed Ms May unfavourably, compared to 22 per cent who viewed her favourably.

The research was carried out by the Worldwide Independent Network (WIN) of which the Irish polling company Red C is a member, and their partners Gallup International, in 55 countries between October and this month. A total of 52,793 people were interviewed globally face-to-face, by telephone or online.

In Ireland, Red C interviewed a representative sample of 1,000 adults online throughout the State between December 4th and 15th.

Russian president Vladimir Putin does better than his US counterpart among the Irish, with 71 per cent regarding him unfavourably and 18 per cent favourably.

French president Emmanuel Macron secures a 60 per cent favourable to 20 per cent unfavourable rating, while German chancellor Angela Merkel polls 57 per cent and 34 per cent respectively.

Red C chief executive Richard Colwell said the poll reflects Irish unhappiness with Brexit, and those controlling the process, and with the leader of Ireland’s long-term partner, the US.

“Instead the Irish appear to look far more favourably on our strong European partners’ leaders, with both Merkel and Macron seen positively,” he added.

“But despite a perhaps more negative attitude to the church in recent years, the Irish hold the pope more favourably than any political leader.”

The poll also identifies the pope as the most popular world leader, with 56 per cent favourable and 18 per cent unfavourable. He was viewed positively among 75 per cent of those surveyed in Latin America and 66 per cent within the EU.

The world ratings from Ms May are 38 per cent favourable and 31 per cent unfavourable. Among EU countries surveyed, only Italy and Poland view the British prime minister favourably.

Worldwide, Mr Trump polls a 31 per cent favourable and 58 per cent unfavourable rating. Two years ago, almost three in five, 59 per cent, polled throughout 65 countries, had a favourable view of his predecessor, Barack Obama.

The world poll puts Mr Putin at 43 per cent favourable, up 10 points in two years, and 40 per cent unfavourable.

It is the first time, since the poll was initiated in 1977, that a US president polled the least favourable among the world population and was outpolled by a Russian president.

Mr Putin performs favourably in most regions of the world, except the US (14 per cent) and the EU (28 per cent).

Ms Merkel emerges as the most popular EU leader around the world, with 49 per cent favourable and 29 per cent unfavourable.