Haughey told Thatcher that Ireland was financially ‘up against the wall’

State Papers 1987: Then taoiseach jokingly asked for loan of ‘£2bn or so’ from British PM 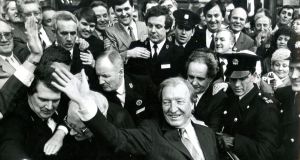 When Charles Haughey replaced Garret FitzGerald as taoiseach in March 1987 there were fears the Anglo Irish Agreement might collapse and the government would renege on the commitment to extradite terrorist suspects to the UK.

In opposition, Haughey had vehemently opposed both measures but after his return to power in 1987 he faced a major political challenge in coming to terms with both.

Interestingly, one of Garret FitzGerald’s final acts before he left office was to write to British prime minister Margaret Thatcher reassuring her that Haughey would honour the Anglo Irish Agreement regardless of what he had said in opposition.

Once he was elected taoiseach, that is precisely what Haughey did. His tánaiste and minister for foreign affairs Brian Lenihan struck up a cordial relationship with northern secretary Tom King and the Anglo Irish intergovernmental conference resumed as before.

Extradition was a different matter. Shortly before it left office, the FitzGerald government had passed legislation to give effect to the European Convention on the Suppression of Terrorism, which would allow the extradition of terrorist suspects from the Republic to the UK.

A few months earlier, Haughey had vehemently opposed the legislation, which was not due to come into effect until December 1st, 1987, and he faced a huge political challenge to square off the demands of the British government for its implementation and the opposition of much of the Fianna Fáil party, particularly the ordinary members.

The first meeting between Haughey and Thatcher was scheduled to take place on the margins of the European Union summit in Brussels in June. In advance of the meeting, the cabinet secretary Dermot Nally sent a memo to the taoiseach outlining his contacts with Thatcher’s adviser, Charles Powell, and the British ambassador to Ireland, Nicholas Fenn.

The meeting began with Thatcher confiding to Haughey that the dinner with EU leaders the previous night “was one of the worst” she had ever experienced. “I have the feeling people are trying to bounce me but of course this won’t happen,” she added, before inquiring about the economic problems of the Republic.

“In many ways we are right up against the wall,” replied Haughey. “We have serious problems with the public finances. There is a large budget deficit, unemployment and no economic growth.”

After the mutual confidences, they got down to Northern Ireland, with Thatcher saying the situation was terrible. “Terrorism is continuing even under the Anglo Irish Agreement,” she said, adding that the scale of unionist disaffection was a real problem and one she hadn’t expected.

In response, Haughey pledged to handle the agreement sensitively. “You will have noticed that we have been very reticent on the question since the general election. We will continue to do that. I certainly will not exacerbate the situation.”

He also tried to butter her up by saying she was the first British prime minister to tell the unionists they had to move. “You have stood firm and that is an historic contribution to Anglo Irish relations. You must not forget that. You did not, like prime minister Wilson, for example, back down.”

Thatcher was not completely mollified, saying she had been led to believe the minority community would not harbour the IRA if there was an agreement. “But the security situation has got worse. It is all very worrying.”

Haughey explained the difficulties involved in policing the border, to which Thatcher replied she could understand the difficulty finding the resources to deal with it.

Haughey replied in a joking fashion: “If you would lend us £2 billion or so . . . It is very difficult for us when we are cutting public expenditure very severely to allocate so much to security but we are doing what we have to do.”

The meeting lasted little more than 20 minutes but it concluded on a cordial note and the following statement was issued. “The Prime Minister and the Taoiseach had a very useful and constructive discussion of current issues. They committed themselves to continued cooperation within the framework of the Anglo Irish Agreement and to all possible measures to defeat terrorism.”

However, the cordial relations were put under stress in the autumn as the political pressure on Haughey not to go ahead with extradition mounted. In an effort to sort it out, Lenihan and King met as did the attorneys general of the two countries.

By early November, as it appeared that Haughey would not be able to deliver on extradition, the atmosphere was fraught. Thatcher’s closest adviser Charles Powell met Irish embassy official Richard Ryan for lunch in London to discuss the position.

In his report to Dublin, Ryan quoted some of Powell’s points. “They are a bit concerned that [British cabinet secretary] Robert Armstrong’s conciliatory manner may have had the wrong effect in Dublin. If Armstrong gave the impression ‘that everything will be alright’ then this was misleading. If the Convention [on Terrorism] does not go ahead, said Powell, everything will not be alright. There will in his view be a ‘sharp’ reaction from Mrs Thatcher and the overall relationship will be affected.”

Powell did stress there was no question of the Anglo Irish Agreement being in jeopardy even if extradition did not go ahead.

The IRA bombing of a remembrance day service in Enniskillen on November 8th changed the political atmosphere. Haughey decided to press ahead with extradition subject to a number of safeguards but these were contested by the British, who argued they would make it impossible.

The Extradition Bill was introduced in the Dáil a week before the EU summit in Copenhagen on December 4th and 5th, at which Haughey and Thatcher were scheduled to meet again. The British side remained unhappy with safeguards in the Bill.

The day before the meeting, Dermot Gallagher, assistant secretary in the Department of Foreign Affairs, sent a memo to Dermot Nally outlining the areas of discussion that might be pursued.

He suggested a broad political discussion on the political difficulties faced by each of the leaders might be best. “This issue should not be allowed to continue as a bone of contention between the two governments. In the highly unlikely event that the new arrangements created any problem, the Taoiseach has given an explicit public and private commitment that he would be prepared to go back to the drawing board.”

The two leaders met the following day, at which Thatcher made clear her reservations at the way the extradition issue had been settled and her general unhappiness at the security situation.