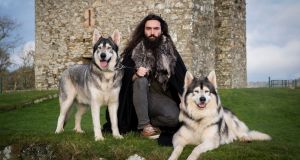 Two dogs from Northern Ireland which starred in Game of Thrones are helping drive a surge in the popularity of a rare breed.

The owner of Odin and Thor, two Northern Inuit dogs which played direwolves in the hit show, is facing a growing number of enquiries about pups but has turned down offers from celebrities wanting to buy the pets.

William Mulhall, from Co Down, said his dogs have met about 400,000 people in the last four years as a result of their roles as Summer and Grey Wind in Game of Thrones.

“Odin and Thor are Northern Inuits, which is a wolf lookalike breed, the closest thing to wolf we can get without a licence,” said Mr Mulhall. Their parents were brought from England, making them the first born in Ireland.

Usually when a wolf appears on screen it will be a Northern Inuit due to the similar appearance.

Mr Mulhall bought the pups seven years ago, and three weeks later the breeder called to say a TV show was interested in using them. After seeing them, trainers from the show picked Odin and Thor to be cast as direwolf pups.

However, the two are not the only members of the family to appear on the show.

Mr Mulhall featured as an extra in the series, while his father played a Dothraki slave master. His two brothers have also been involved, as has one of their boats.

The dogs are now a regular attraction on the flourishing Game of Thrones tourism circuit in Northern Ireland, where fans from all over the world visit locations used in the series.

Mr Mulhall is also investigating the possibility of using Odin to father a litter: “He’s had quite a lot of popular demand asking for pups, so we’ll see what happens in the future.

“We’re just happy to have healthy, happy dogs. They love people, they love being around people.

“They live in the house with us, they have their own sofa. We take them for walks, minimum three miles a day, and they are really quite friendly and affectionate dogs.” – PA