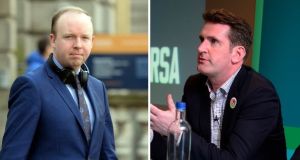 Fine Gael TD Noel Rock and Labour Senator Aodhán Ó Ríordáin have been involved in a bitter spat on Twitter over objections to housing developments.

Mr Rock accused Mr O’Ríordáin of being a “serial objector and massive hypocrite” and said the Labour Party used to have a policy of supporting housing for everyone.

Mr O’Ríordáin countered by accusing Mr Rock of “cheap shots” and said Fine Gael are “ripping up the rule book to benefit landlords and developers, but then stage photo ops with supposed ticket touts to look tough”.

The reference to ticket touts is the private members Bill brought forward by Mr Rock to stop tickets being sold for above face-value prices.

Mr Rock is the latest prominent Fine Gael politician to target Mr Ó’ Ríordáin over his objections to housing developments.

Mr Rock followed up on Tuesday by tweeting: “Raheny, Howth, Marino, Clontarf: objections to housing everywhere from Aodhan. The only thing he does better than self-publicity is object to housing during a housing crisis.”

Aodhan the only thing that has gone missing here are Labour values: Labour of old were in favour of housing for workers, for renters, for families. You’re in favour of serial objection - NIMBYism - under literally any premise and worse, you can’t even see it, you’re that deluded

Raheny refers to Senator O’Ríordáin’s involvement in the campaign to stop the building of 104 houses and 432 apartments on the St Paul’s College site in St Anne’s Park.

In Howth he objected to a 164-apartment development in Howth, north Co Dublin, being built on the site of the former Baily Court Hotel. He also appealed a decision to grant planning permission to an apartment complex in Howth on the old Techrete site.

In Marino he is one of a number of public representatives, also including Minister of State Finian McGrath, who have objected to a 377-apartment complex and eight houses on Griffith Avenue in Marino.

Senator Ó’Ríordán responded by asking Mr Rock to clarify what he means by his objecting to a development in Clontarf.

“Is it in your head? Why is @naoiseomuiri wrong about Marino & St Anne’s? Why did you rip up rule book for developers? (Btw there are existing permissions for Marino & Howth but your developer buddies got greedy).”

Mr Rock responded: “Again, did they object to all of Howth, Marino, St Anne’s? Are they named on Techcrete development judicial application too? No all round. That’s why. There are legitimate objections, and then there’s Aodhan running as leader of the Nimby party.”

Senator Ó’Ríordáin retorted that he had “gone out of my way not to score political points over the issue of St Anne’s Park “but if @finegael feel that way they should let everyone on the Northside know – esp all those who use and love St Anne’s Park”.

Mr Rock referenced a quote by DCU lecturer Eoin O’Malley who said the land in St Anne’s Park is not actually part of the park. “This was private land the school chose to sell. Look at the number of pitches there. The bit being developed . . . is not open to the public. If there are legitimate concerns about traffic, deal with them in planning, but don’t block building homes.”

Senator Ó Ríordáin accused Mr Rock of going missing “cos he can’t back up cheap shots with facts”, to which Mr Rock responded: “Aodhan the only thing that has gone missing here are Labour values: Labour of old were in favour of housing for workers, for renters, for families. You’re in favour of serial objection – Nimbyism – under literally any premise and worse, you can’t even see it, you’re that deluded.”

Independent TD Michael Healy-Rae also became involved. He tweeted: “Labour have lost their way in a massive way, especially when they were in Government with FG. I said this on the Dáil recently to the Labour Party. And yes serial objectors are a scourge in Ireland. We have it in Kerry with the Shannon LNG project. Look at Athenry with Apple.”