Oakmount begin retail-led scheme in the centre of Bray 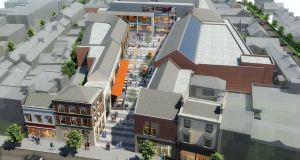 A computer generated impression of the Oakmount development in Bray centre.

The retail-led scheme, which has been the subject of development proposals since 1996, is finally proceeding and may open as early as spring 2020.

It will be called Bray Town Centre and include three anchor stores – one of which (a grocery unit) is now reserved – and nine other retail units, restaurant and cafe space, and 250 car parking spaces.

A new urban street – accessed from Bray Main Street – and a central plaza with pedestrian access from Quinsborough Road are also incorporated into the development which will be centred a new pedestrianised street that will open on to Main Street and end in a public space.

Savills, letting agents for the scheme, says that in addition to the reserved anchor, several other substantial pre-lets are now “confirmed” for the scheme.

These include Paddy McKillen jnr’s Press Up Entertainment hospitality group which will operate a five-screen Stella cinema complex. This upmarket cinema experience has proved successful since opening in Rathmines last year with its arty interiors and focus on comfort.

Press Up operates about 30 businesses including the Dean Hotel in Dublin and the Wowburger franchise. It also operates Elephant & Castle restaurants – one of which is now set to open in Bray – after acquiring the business from the family of US restaurateur Dr George Schwarz in 2017.

One of Dublin’s most popular restaurants, Elephant & Castle opened in Temple Bar in 1989 and is well known to tourists and locals due to the popularity of its signature chicken wings. It has since spread to Rathmines and another outlet in the chic southside village of Monkstown is just about to open.

Agent Darragh Cronin says Bray’s main street is “poorly provided for” due to a lack of restaurants, larger retail units and leisure offerings. “Bray Town Centre will bring modern retailing and entertainment to the town,” he says.

This site was the subject of several planning applications from Ballymore Properties but none went beyond the planning stage. It reverted to use as a car park before Bray Town Council acquired the site in late 2013.

In November 2016, owner Wicklow County Council sought a development partner to realise the site’s potential. Oakmount was appointed to develop the centre in March 2018 which is expected to have an end value of about 60 million.

Bray has experienced a rapid population increase in recent years attracted by more affordable house prices than the nearby south Dublin suburbs and its proximity to the Wicklow mountains. It is served by the Dart and numerous Dublin Bus routes and offers easy access to the N11 and M50.