Planes, trains and an ageing car: Irish fans push the boat out to make World Cup 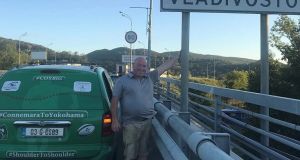 PJ Heffernan and his wife Maureen left Connemara a month ago in a ‘03 registered Chrysler to drive to Yokohama in Japan for Ireland’s Rugby World Cup clash with Scotland on Sunday. Photo: ConnemaratoYokohama/Instagram.

It’s a long way to go for a local derby, but even so, thousands of Irish rugby fans have taken planes, trains, and in one case an ageing car to be in Yokohama for the team’s opening game of the Rugby World Cup against Scotland on Sunday.

In the competition for doing it the hard way, first prize is already assured to Clifden restauranteur PJ Heffernan and his wife Maureen, who left Connemara a month ago in a ‘03 registered Chrysler, planning to cover the distance by road. They based the journey on a route plan of “get the boat to Cherbourg and then turn left”. They are due in east Japan sometime around now.

But even aeroplane trips to the far east are hard work, as the bedraggled masses transiting through Hong Kong airport – the Limerick Junction of Asian air travel – testified on Friday.

Connoisseurs of Irish sports pilgrimages were struck by how sober they were, even allowing for the early hour. Only a couple of heavyweight South African supporters were hardcore enough to be drinking pints at 8am at the boarding gates, while similarly shaped but subdued Munster and Leinster fans sipped water or coffee.

But what they lacked in dedication to old rugby tradition of ruining their health, they made up for in numbers and shirt colours.

“Lots of Irish here,” a man with a New Zealand accent noted quietly to his friend, both also sipping coffee.

Another good omen, arguably, was the Tokyo-bound presence of a large group from Inishowen Rugby Club. Based in Carndonagh, they claim to be Ireland’s most northerly rugby enclave, and since Carndonagh is farther north than anywhere in the other “North”, they must be right.

The oval ball has not traditionally reached those parts of Donegal. But it infiltrated Inishowen sometime in the 1970s and is still there. Irish rugby may or may not make it to the top of the world over the next few weeks, but thanks to the Carndonagh, it has belatedly made it to the top of Ireland.

If Joe Schmidt’s team are as well prepared for the tournament as Aoife O’Brien, meanwhile, they should do well. Aoife and her travelling companions Dean Perry and Conor Heaphy, all from Celbridge, have been in Tokyo since Tuesday because, as she put it, “if you’re going to travel half-way around the world to see a game, you might as well enjoy it”.

Travelling on Friday, as many did, she would still be jetlagged, whereas “I wanted to embrace the match fully”. And after all, they do only have tickets for the Scotland game, and were lucky to get those.

O’Brien and Perry secured theirs in the general lottery last October, while Heaphy earned his by queueing for “seven hours” on the World Cup website later for returns. In a very happy coincidence, he ended up with a seat beside his friends.

The Celbridge group were among those who didn’t make it into the official tournament fanzone on Friday night for the opening game between the hosts and Russia. But if there were enough Japanese rugby enthusiasts to fill that, Tokyo in general is taking the World Cup with a shrug so far.

Most local bars were not even showing the game on TV, as the Kildare visitors found to their frustration.

Happily, however, The Irish Times saved the day. Not the newspaper in this case: only a pub of the same name in Shinbashi – although a fading newspaper front page is part of the wallpaper in the gents’ toilet. O’Brien and her friends watched the game there, as did Trudie Mulhall and her husband Shay, from Dublin, who are in Japan as Trudie’s 50th birthday present.

One arrival that had been briefly feared in and around Yokohama this weekend – Typhoon season – will not now be making its presence felt. Sunday is expected to be muggy as usual, but drizzly at worst. There will also be little or no wind, one less thing for kilt wearers to worry about.