Ireland hope that if desperation is the disease, then experience is the antidote 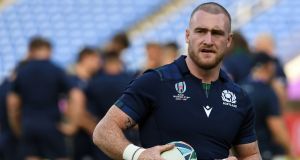 If desperation is the disease and experience the antidote – quote credit: Andy Farrell – Ireland are far from full health.

The journey started eight days ago, seems likes eight years ago now, with Johnny Sexton talking matter-of-factly about winning the World Cup. “As long as I’ve played sport I wanted to win every competition.”

That was the only hint of intent from a battened down, cranky camp. Savour this mood because sustainable winners almost always appear vague and cold as stone to outsiders.

Unending media duties are way down their list of priorities.

Ireland in the World Cup environment have come up short again and again. We gather to witness the beginning of the James Ryan era crossing over with the elders last chance to succeed or fail on the grandest stage.

Step one is an old and manageable foe.

What can Scotland boast that Ireland lack? Stuart Hogg.

“If there is a time to take Ireland it is now,” said the Scots’ only bona fide star player of the last two decades.

For Scotland, Allan Dell and WP Nell are shaped more like highlander props in the David Sole or Tom Smith mould than bulging Afrikaners. For Ireland, Jean Kleyn is being held until Japan six days from now, with CJ Stander keeping Jack Conan benched – proving Ireland have a superior pack of forwards.

The time to catch Ireland is not supposed to be until mid-October, but Chiba purgatory renewed the brittle narrative that enveloped the squad in 2015.

At the welcoming ceremony, Joji Koide, the mayor of Ichihara, mentioned the accolades his city has received for “grass inspection”.

Several injuries occurred on the award-winning surface. Joey Carbery is fit enough to do the warm-up on Sunday but not sit on the bench; Robbie Henshaw’s hamstring tore a little, which means a lot at a six-week tournament; and Rob Kearney’s return to 2018 Grand Slam form – with the added weapon of flinging an accurate pass – is slowed by calf pain.

Tendonitis continues to plague the knee of Keith Earls, although Schmidt stated he was the “sharpest player in training” – which oddly didn’t warrant selection ahead of Chris Farrell.

That’s an entire backline of alternatives needed to contain Hogg and the other Scottish snipers.

The Irish management refused to provide clarity as these wounds piled up. Their information channels are at best unreliable, neither confusing nor fooling anybody in Scotland’s chirpy camp. It’s a World Cup so most teams are using smoke and mirrors but Schmidt seems obsessed with vague messaging.

Gregor Townsend and Finn Russell will have hatched a plan to expose Jordan Larmour at 15. Maybe it is another ruse. Maybe Andrew Conway will switch to fullback.

“Win the collisions first and foremost,” said Farrell. Do this and not a single Townsend strategy will matter.

World Rugby referees’ chief Alain Rolland was asked this week about coaches. Rolland explained that everyone knows the score when it comes to collisions, yet rugby’s rules of engagement make it impossible to avoid accidental red cards. Going low, as Farrell explained, only puts the tackler in harm’s way. Think knees propelling into skulls.

The modern player cannot linger on the risks.

“See, I always think that desperation is a disease, really, because it makes you make bad decisions along the way,” said Farrell. “And that’s what experience gives you, to make sure that you’re focused in the right way, and that’s why I say cautiously that we are building.”

The former Wigan colossus brings rough experiences from 2015. There is no way he will allow Ireland to suffer England’s fate. There are so many Irish players desperate to go where Keith Wood, Brian O’Driscoll and Paul O’Connell could not. Their experience is real but Scotland are far from desperate, so expect a genuine contest.

“They like to take risks, calculated risks,” said Farrell of the gun-slinging Hogg and friends.

Ireland enter the arena in a dark, simmering mood, more like actual brothers sharing a room. This has been evident in the demeanour of every member of the coaching team. That Farrell was the friendliest of them says enough.

Sexton’s wellbeing, with Carbery only creeping back from injury, means everything to Ireland now

This is how they want to be. Happy-go-lucky squads don’t win World Cups. The meanest athletes hoard medals.

Even the ever approachable Richie Murphy was a tad spiky when probed about Sexton’s ability to deal with the weight of an expectant nation. “The one thing I would say about that is he’s learned to deal with that really well over the last while. He seems quite calm, very focused and massively up for what’s going to come up over the next while. I do think he’s in a really good place.

“Is he in the best place I’ve ever seen him? I’ve known him for quite a long time now, maybe over 10 years, so I’m really happy with where he’s at. I’m not saying he’s the best he’s ever been either, by the way. Do you understand that?”

Sexton’s wellbeing, with Carbery only creeping back from injury, means everything to Ireland now.

“There is no doubt 10s are the main computers of the game,” said Steve Hansen, surveying all from his All Blacks perch.

With that in mind, mixing and matching Richie Mo’unga and Beauden Barrett is how these modern All Blacks intend to evolve, right Steve? “I can’t be telling you Irish too much. You are number one in the world. You should be telling us.”

Grumpiness being a necessity, what other weapon is needed?

“We believe defence will win World Cups,” said Hogg, “and it’s something we have been working incredibly hard on.”