Pilots and passengers have just minutes before decompression knocks them out

Early symptoms of hypoxia can include uncontrolled giggling 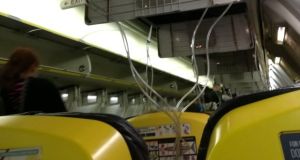 Humans cannot survive long at the heights reached during flights, because the air is so thin, and so aircraft cabins are artificially maintained at a pressure similar to that encountered at 8,000 feet or less.

This is achieved by taking air from one of the engines after it has been compressed by a series of fan blades prior to being ignited to provide forward thrust. This is known as bleed air.

Without artificially pressurised bleed air, passengers and crew suffer a condition known as hypoxia, which can cause them to lose what is known as “useful consciousness” within a few minutes. Indeed pilots rapidly lose the ability to make decisions and safely operate the aircraft if they fail to don oxygen masks within 30 seconds of an aircraft losing artificial pressure, or depressurisation.

If the pressure in the cabin falls below that normally encountered at 14,000 feet, oxygen masks are automatically deployed in the passenger cabin and pilots receive a warning in the cockpit instructing them to don oxygen masks.

Cabin crew are trained to recognise the early symptoms of hypoxia in passengers. This can include uncontrolled giggling and is sometimes noticed even before masks drop from the cabin ceiling.

Once a depressurisation warning is received passengers have just 10 minutes of oxygen available to them from the masks and the pilots must immediately bring the aircraft to a lower altitude of 10,000 feet so everybody can again breath normally and safely. This usually means putting the aircraft into a steep and rapid descent which can alarm passengers as well as subjecting them to conditions which often result in serious discomfort, including severe ear pain.

One of the worst examples of cabin depressurisation occurred in 2005 when a Helios Airlines Boeing 737 crashed in Greece killing 121. It was later discovered the the aircraft’s depressurisation system was not properly switched on after take-off so the pilots and passengers probably lost consciousness shortly after the airplane reached cruising altitude. The jet flew under autopilot until it ran out of fuel and crashed. In 1999 the wealthy US golfer Payne Stewart died when his private jet flew hundreds of miles after a depressurisation incident before also running out of fuel and crashing.

Like other airlines, Ryanair has in the past experienced depressurisation incidents resulting in the deployment of oxygen masks. One of these, after taking off from the Spanish airport at Reus in 2004, was blamed on pilot error and resulted from taking off in a so-called bleeds-off condition when pilots deliberately do not switch on the pressurisation system to ensure greater engine power is available for taking off on short runways. Oxygen masks were deployed when the pilots failed to switch on the pressurisation system after take-off. The aircraft landed safely afterwards.

However failure to switch on the pressurisation system is usually noticed shortly after take-off and the latest incident involving the Ryanair flight to Croatia, which occurred well into the flight, may have originated in mechanical failure of the pressurisation equipment and this may include the system of valves which maintain pressure in the aircraft cabin after it is depressurised. Failure of this valve system is not unknown and can result in rapid decompression.

Structural failure on an aircraft can also result in decompression. Five hundred and twenty deaths, one of the largest death tolls ever in a single air accident, resulted from rapid decompression following a major split in the rear fuselage of a Japan Airlines Boeing 747 in 1985. In 1988 an Aloha Airlines air hostess was sucked to her death when part of the cabin roof peeled away on a poorly maintained airliner above Hawaii although in that case the pilots managed to land the aircraft safely.

Earlier this year a US woman died after being partially sucked out of a Southwest Airline jet after her window was fractured by debris from an exploding engine.