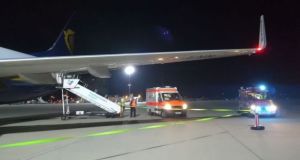 The scene at Frankfurt-Hahn Airport after a Ryanair plane made an emergency landing. Photograph: Conor Brennan

German aircraft accident investigators have begun an inquiry into the sudden loss of cabin pressure on a Ryanair flight from Dublin to Croatia on Friday.

The flight had to make an emergency landing at Frankfurt-Hahn Airport after losing cabin pressure, with dozens of passengers requiring medical treatment upon landing.

German authorities have contacted the Irish Air Accident Investigation Unit, informing them that they have opened an investigation into the incident. It is understood a formal notice of the investigation will be issued on Monday.

During the flight, oxygen masks came down and passengers were seen bleeding from the ears as the pressure dropped in the cabin, a passenger on the flight told The Irish Times.

Frankfurt police said that 33 passengers were taken to hospital complaining of headaches and earaches and suffering from nausea, according to news website Spiegel Online.

As the airplane landed in Germany, the German Federal Bureau of Aircraft Accident Investigation is responsible for leading the investigation into the incident.

A spokesman for the Irish Air Accident Investigation Unit said they would “support” the German agency in their review of the incident.

Following the incident, the Irish Aviation Authority said “sudden depressurisation is a rare occurrence”. However, a spokesman would not comment on the specific incident before the investigation by Irish and German investigators was completed.

It is routine in cases where passengers are injured on a flight, or where a fault or malfunction occurs, for an aircraft accident investigation to be launched.

Sudden loss of cabin pressure can result in breathing difficulties while airborne, due to the high altitudes, and can lead to pilots and passengers passing out unless they receive supplementary oxygen. Cabin pressure essentially means the air pressure in the aircraft is kept much lower than outside it, making it easier to breath.

Loss of cabin pressure has resulted in major tragedy in the past. In 2005, cabin pressure dropped on a flight from Cyprus to Athens, causing the pilots to fall unconscious. While the Helios Airways plane was subsequently running on autopilot oxygen supplies ran out for the 115 passengers, and the plane crashed when it ran out of fuel, killing everyone on board.

Fianna Fáil spokesman for transport Robert Troy said he expected Ryanair to carry out their own review of the incident as well. “It’s obvious that things changed rapidly, which caused great anxiety and worry,” he said.

“Ryanair have a strong record in public safety, and I trust an investigation will be carried out without delay,” he said.

In a statement on the incident Ryanair said: “In line with standard procedure, the crew deployed oxygen masks and initiated a controlled descent. The aircraft landed normally and customers disembarked, where a small number received medical attention as a precaution.”