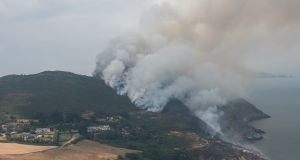 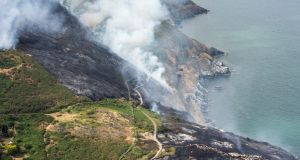 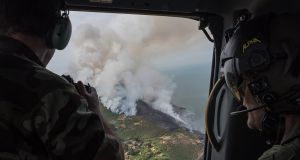 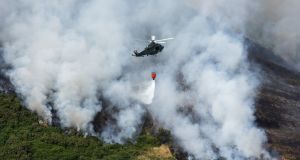 Forecasters are warning that there is no end in sight to the current drought as water restrictions escalate across the capital and emergency services battle to contain raging wildfires threatening houses along the east coast.

Despite an Air Corps helicopter dumping 150,000l of sea water onto Bray Head over the past 24 hours to tackle a fire on the Co Wicklow hill, concerns are mounting at the speed with which the blaze is spreading, as well as its direction.

Several nearby homes which have been evacuated are in danger of being engulfed by the blaze, according to Capt Mick Barcoe, of the Air Corps, which has a firefighting helicopter on a continuous loop between the Irish Sea and the headland in an attempt to douse the flames.

“The fire is not under control yet – in fact it is spreading,” Mr Barcoe told The Irish Times.

“There is a real concern at the moment that it is going to engulf some houses on the Bray side of Bray Head.”

Two pilots and one crewman on board the AgustaWestland AW139 helicopter have been enduring searing heat and poor visibility in the smoke as they operate at close range to the blaze, having continuously soaked the ground of the hill since 3.30pm on Friday.

The operation had to be stood down over safety fears for two hours on Friday, between 5pm and 7pm, because someone was operating a drone in the area.

On the ground, firefighters are continuing to drench the scorched earth in sections where the blaze has been brought under control, amid concerns it will reignite overnight in the hot, dry conditions.

It is the 18th day in a row the Air Corps has assisted firefighters across the country amid a surge of wildfires. In total, it has dropped 750,000l of sea and lake water – the equivalent of 1.5 million regular bottles of water – onto fires within the past three weeks.

Kathryn Mason, who is staying with her mother in Windgates, on the western side of Bray Head, said the Air Corps and Wicklow Fire Service have been “unbelievable” in keeping the fire from spreading to their side of the headland.

“We’ve timed them – they are spinning out to sea and back every two minutes. It is incredible,” she said.

“One of the houses here is just 20m away from the fire.

“Some of the houses along the road have been evacuated, so I came out from Dublin to make sure my mother is alright.

“She is hoping she is not evacuated.”

Ms Mason said the ground was like “tinder” and the slightest gust of wind causes the fire to spread rapidly.

“The speed it was moving was terrifying. In the space of two hours it was moving from not being visible to being at your feet almost,” she added.

Rail services were suspended for a time between Bray and Greystones due to the fire. The Bray Head cliff walk was also closed to walkers and plumes of smoke affected visibility on a nearby section of the M11 motorway, causing delays.

Meanwhile, Met Éireann has warned there is no end in sight for the drought conditions.

Forecaster John Eagleton said there may be an average of about 1mm of rain a day over the country up until July 24th. This rain will occur mostly in the west rather than in the densely populated east, where water restrictions are in place.

“It is nothing near what we need.

“The situation won’t be improving,” he said, in relation to the falling reservoir stocks.

“It will probably continue to deteriorate. We’ll be taking more water out of the system than we can replenish.”

Mr Eagleton said temperatures will get cooler during the week – down to between 16 degrees to 19 degrees – but the latest predictions show it will get hotter again next weekend, with temperatures forecast to rise to the mid- to late-20s and as high as 27 degrees by Monday week.

“There isn’t going to be enough rain for the drought to end in any meaningful way,” he added.

“It won’t bring the water up to where we need to be. There is no realistic end in sight for it.”

The forecaster said the country can usually cope with one dry season, adding: “But if we get a second dry season in the autumn or the winter, we’ll be in trouble.”

Comparing the prolonged dry spell to the summer of 1976, he said: “The thing about 1976 is that we didn’t have as many people and they weren’t using as much water then.

“Nobody was showering twice a day, turning on the dishwasher in the evening – there were no dishwashers and only people in Dublin 4 had showers.”