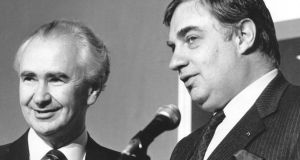 Peter Sutherland (right), then chairman of AIB, with the bank’s then chief executive, Gerry Scanlan, in 1991. Photograph: Jack McManus

Peter Sutherland’s dominant presence in that space between politics and business during a career spanning four decades gave him prominent seats in some of the world’s most powerful boardrooms.

Although he never ran a company or was elected to office, Sutherland was a significant player and had a CV that any corporate executive would envy.

The Dublin rugby prop forward continued in that position long after his playing days ended, standing at the shoulder of chief executives running global multinationals and at times willing to encourage a fellow player off the pitch as the tackles in the big business leagues required.

The young barrister who failed to win a seat for Fine Gael in the Dublin North West constituency in 1973 used the connections he made in politics as Ireland’s attorney general (1981-1984), European Commissioner (1985-1989) and director-general of General Agreement on Tariffs and Trade (Gatt), later the World Trade Organisation (1993-1995), to build an impressive Rolodex of contacts that opened big corporate doors.

He served as chairman of oil giant BP from 1997 to 2009, a period during which it was Europe’s biggest company, valued on the stock market at £236 billion and throwing off £42 million a day in profits. The lead role he played in pushing out BP chief executive Lord Browne, once hailed as “the Sun King of the oil industry,” after 12 years as chief executive showed his ruthlessness as a boardroom chairman.

In between his stints at the European Commission, when he was in charge of competition policy and broke down economic barriers, and at Gatt, where he set the legislative framework for economic globalisation, Sutherland was chairman of the board of Allied Irish Banks from 1989 to 1993.

It was a profitable but stormy period at the country’s biggest bank as he represented the company at the Dirt parliamentary inquiry into institutionalised tax evasion. AIB was the biggest offender, stumping up more than €110 million to the Revenue Commissioners. While at the bank Sutherland threatened to sue Des O’Malley, then minister for industry and commerce, who tried to block AIB’s application to set up a life-assurance company for walking away from its calamitous investment in insurance company ICI.

It was this forceful personality and willingness to take on a fight that brought Sutherland into close contact with presidents and prime ministers through his elevated role at Gatt. Chairing the Uruguay round of global trade talks that concluded in December 1993, he produced the most significant trade agreement in history that set up the WTO and paved the way for a more interconnected world of commerce.

He capitalised on the high-level contacts he made during those close-quarters trade negotiations. On leaving the WTO, Goldman Sachs asked him to chair its London-based international arm using his vast network of contacts to generate business for the investment bank in Europe. The association made him wealthy too, bringing him a reported £125 million in shares. He remained with the company until 2015.

His role at another bank ended in less illustrious fashion. His eight-year term as a non-executive director of Royal Bank of Scotland ended in 2009 after the lender was bailed out by the UK government following the financial crash, leading to a clear-out of the boardroom. Directors were blamed for allowing chief executive Fred Goodwin to embark on a globe-spanning acquisition spree.

Sutherland later tried to minimise his role in the risky strategy that collapsed RBS. “The complexity and the reality is that boards can do – and are involved in – only so much decision-making and no more; you cannot micromanage,” he said.

As a captain of globalisation, Suds – as he was popularly known – worked the halls of Davos better than anyone. The annual Swiss economic think-in of the World Economic Forum, of which Sutherland was a board member, was the place where governments, corporate giants and international organisations met. Sutherland was in his element there, rubbing shoulders with world foreign ministers, European royalty, top United Nations officials and leading business figures.

After BP, he took on board positions at German insurer Allianz, Turkey’s largest conglomerate Koc Holdings, and BW Shipping based in Singapore, reflecting his wide interests and the shifting economic powers in the world. He was a long-time senior figure at the secretive, invitation-only Bilderberg Group and the Trilateral Commission, roles that confirmed his status as a grandee of the global elite.

His high international standing twice made him a contender for UN High Commissioner for Refugees, a role he declined due to other commitments, but he took on other prominent assignments. He was appointed by Pope Benedict XVI to the board behind what is regarded as the Vatican’s central bank and UN secretary general Kofi Annan named Sutherland his special representative for international migration, a role he concentrated on during his final years.

The Dubliner put his capacity to cajole down to his Irishness, referring to African or South American leaders recalling Irish priests who taught them and how it could be an ice-breaker in negotiations. “As a people we are liked. Even before they know you and your failings, people respond positively,” he said.

Sutherland rarely held back on sharing his views at home when it came to a crucial referendum on the future of the European Union or, more recently, on the consequences of Brexit on the Irish.

“I am a man who is passionately interested in public affairs, particularly [those] of Ireland,” he said in 2010. “I am energised by debate and dispute and quite happy to fight my corner. I have a very clear idea as to what I actually believe in.”