Peter Sutherland, who has died aged 71, built a worldwide reputation as an influential mover and shaker in industry, banking, international trade and in seeking solutions to recent crises in migration into Europe.

He became attorney-general at 35 and then the youngest member of the EEC Commission in charge of the powerful competition portfolio. His performance in that role - fining multinational companies for breaches of European law and helping to break up state monopolies in air transport, energy and telecommunications - made him a much-sought-after figure in the boardrooms of banks and industry.

His growing reputation as a global operator was further enhanced when in less than a year he finalised the lagging Uruguay round of multilateral trade negotiations and transformed the world trade body, GATT, into the more dynamic World Trade Organisation.

The chief US negotiator, Mickey Kantor, said admiringly that Sutherland had become “the father of globalisation”.

One commentator went so far as to say that while “not elected, he has had far greater political impact in the past two decades than almost all of the democratically elected leaders”.

Peter Denis Sutherland was born in Dublin in 1946. His father was a well-known insurance broker living in Monkstown. At the age of eight, Peter was sent to Gonzaga College. He did not star there but captained the senior rugby team and claimed later that the “hand of the Jesuits” was an influence for the rest of his life.

He performed well in legal studies in UCD and the King’s Inns and began to build up a successful practice as a barrister mainly in civil and insurance cases. He was also on the legal team defending Capt James Kelly in the 1970 Arms Trial and represented the owners of the Stardust nightclub in the inquiry that followed the disastrous fire there in 1981.

Before that he was active among the Fine Gael “young tigers” who promoted Declan Costello’s “Just Society” programme. He stood unsuccessfully for Fine Gael in Dublin North-West in the 1973 general election.

Looking back almost 40 years later, he told an interviewer that this defeat “changed my life – if I had got into the Dáil, I would have given up everything”. In 1974 with his rugby-playing days behind him (he had captained UCD and Lansdowne as a prop forward) he married Maruja Cabria from Spain. They were to have three children.

He was called to the Inner Bar in 1980. He was an active Fine Gael backroom figure in the run-up to the June 1981 election and was chosen as attorney general in the Fine Gael–Labour coalition government that followed. This resulted in a large cut in his earnings at the Bar.

That government lasted only six months, but he was again chosen as attorney general when Fine Gael and Labour were re-elected in November 1982. He was thrust immediately into the conflict over the wording for the anti-abortion constitutional referendum which the taoiseach, Garret FitzGerald, had promised the pro-life campaign before the election. Sutherland later described this period as the “most traumatic” of all the events in his public life.

It was Sutherland who pointed out to the taoiseach that the wording he had agreed to on the equal right to life of the unborn and the mother was ambiguous and could be interpreted in an unpredictable way by the Supreme Court. He was later to be proved right in the X case judgment. but the wording he proposed was rejected by Fianna Fáil and the Catholic hierarchy. 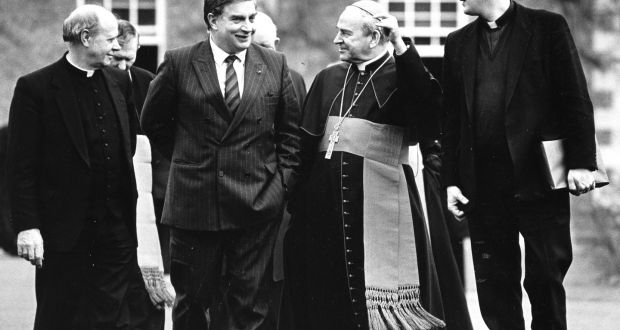 Sutherland and FitzGerald were strongly criticised by elements of the pro-life campaign for trying to change the original wording.

In September 1984, he was nominated by the coalition government to be Ireland’s next EEC Commissioner. Usually a minister would be chosen for such an important post, but the coalition could not afford to risk a byelection. FitzGerald has written that it was his wife, Joan, who suggested Sutherland for the post.

With his legal background, Sutherland saw that the competition portfolio would be best suited for him. Although it does not have a high public profile, its powers to rule on mergers and unfair competition without needing Council of Ministers approval make its holder an influential figure in the Commission.

Sutherland, with his broad legal experience and powerful personality, was soon in his element and got glowing press notices for the way he took on the German, French and British governments on disputed state aids and industrial mergers.

The British prime minister, Margaret Thatcher, fulminated in a radio interview against “that man in Brussels” who was blocking the British Aerospace–Rover merger. In his first year he was also responsible for education and social affairs and took pride in setting up the Erasmus programme allowing third-level students to study across the EU.

When Ireland was obliged to hold a referendum in 1987 to ratify the Single European Act completing the internal market, Sutherland was so incensed by some negative comments from several Irish bishops that he asked his Italian fellow-commissioner, Lorenzo Natali, to get the Vatican “to stop the effusions of some of their bishops”.

He was at a later stage to become an adviser to the Vatican on its valuable assets and receive a Papal knighthood.

As his four-year term in Brussels came to an end in January 1989, there was international speculation that Sutherland might be the next president of the Commission, a post he dearly wanted, but with Fianna Fáil now in power there was no hope of an Irish government nomination.

He was not long idle. Within a few months he had accepted invitations to become non-executive chairman of Allied Irish Banks and a member of the board of high-flying Guinness Peat Aviation, headed by Tony Ryan.

Sutherland was also asked by the Commission to do a report on the completion of the Single European Market - which was to culminate in the Maastricht Treaty and the first steps towards monetary union.

In April 1993, he was urged by the Commission and several EU governments take over the leadership of the stalled Uruguay round of world trade negotiations. This meant becoming director general of the GATT world trade body and moving to Geneva.

He at first refused for family reasons but later agreed. It was to be another turning point in his career as his success in winding up the trade talks and heading the new World Trade Organisation made him a celebrity.

He was offered the chairmanship of Goldman Sachs International and also took on the chair of British Petroleum, a worldwide company after merging with Amoco. He joined the influential but secretive Bilderberg Group and the Trilateral Commission where politicians, industrialists and academics discuss world problems. He also joined the board of the World Economic Forum and was a regular attender at its annual Davos conference.

As his stellar career progressed he was showered with honorary degrees and decorations including an honorary knighthood from Queen Elizabeth in 2004 for services to industry.

In 2006 a new phase opened up with his appointment as the UN Special Representative on Migration and a mandate to prepare a report on the global situation. He helped set up the Global Forum on Migration and Development. The Vatican also appointed him to its commission on migration. In 2009 he was diagnosed with throat cancer but made a successful recovery.

As the refugee crisis worsened in Europe in recent years he became a passionate advocate for the need for EU countries to be more welcoming. He told a surprised German Chancellor, Angela Merkel, she was his “hero” when he met her at an international conference for her gesture in 2015 in accepting one million refugees as other countries blocked borders.

His identification with globalisation and more open borders for migrants attracted vituperation online from right-wing groups.

His appearance in 2012 before a House of Lords sub-committee on migration led to a sneering denunciation as the “globe’s grandee” from a Daily Mail columnist. He was incensed at Sutherland’s frank declaration that EU countries should aim at less “homogeneity” in their populations by allowing in more migrants.

He continued to keep in close touch with Ireland while maintaining a house in London. He was critical of how Irish neutrality put a brake on closer EU co-operation in security and defence. In interviews he would express some unease at his own “essential nationalism” saying that European integration was “the most noble political movement” in modern times.

In 2006 he donated €4 million to a new law school in UCD that was subsequently named after him. He could be sensitive in interviews about his identification with international banking and industry and insisted that he was always attracted, perhaps from his Jesuit formation, to “public service”.

Brexit made him almost despair as a blow to European integration. He described it as a “disaster” and urged Ireland to increase ties to the EU’s “inner core”.

Donald Trump’s views on migration were equally anathema to him. The world of closer European integration, freer trade and globalisation for which Sutherland worked so hard was showing signs of disintegration.

He is survived by his wife, Maruja, and three children- Shane, Natalia and Ian.

Israeli ambassador accuses some TDs of spewing ‘hate’ towards Jewish state 19:51
Academic on €154,000 salary with no work to do accuses Nolan of being his ‘executioner’ 19:37
Couple in their 40s killed in Roscommon house fire are named 19:16
Plan to stop bulk-buying of houses going to Cabinet, says Leo Varadkar 19:03
Unions resist Sláintecare agenda, citing failure to consult 18:59

2 Academic on €154,000 salary with no work to do accuses Nolan of being his ‘executioner’