President of hauliers’ group to run for Fine Gael in Wexford 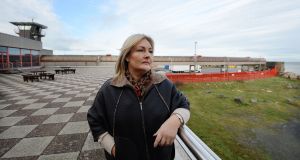 Fine Gael has added a third candidate to its general election ticket in Wexford, with the president of the Irish Road Haulage Association (IRHA) joining two sitting TDs.

The party’s executive council on Wednesday selected Verona Murphy in a move that had been anticipated for some time.

She will run alongside Ministers of State Paul Kehoe and Michael D’Arcy in the five seat constituency. Mr Kehoe and Mr D’Arcy are based in Enniscorthy and Gorey respectively while Ms Murphy is based in the south of the county in Ramsgrange, which is near New Ross.

Labour leader Brendan Howlin, Fianna Fáil’s James Browne and Independents4Change member Mick Wallace - who is running for the European Parliament in Ireland South - are the constituency’s other TDs.

Ms Murphy has been a frequent media contributor on Brexit related issues.

“I have been very involved in Brexit and, as president of the IRHA, have advised the different stakeholders with the needs of the road haulage sector and the regeneration of Rosslare Europort,” she said, adding that the port is “extremely important in terms of trade and tourism and future growth”.