The author of an explosive book on Donald Trump has said he believes the US president’s son-in-law and senior adviser, Jared Kushner, will be indicted. Video: Waterstones 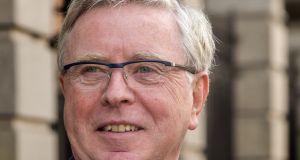 Pat Cox: the Irish former MEP has said he had no involvement with a group of former European politicians known as the Hapsburg group that were, it is alleged, used secretly by Paul Manafort. Photograph: Brenda Fitzsimons

Former politician Pat Cox has said he is “perfectly happy” to hand over records about his political work for the European Parliament in Ukraine to the investigation into Donald Trump’s former campaign manager.

Mr Cox worked on behalf of the parliament on a mission between 2012 and 2014 to persuade the then Russia-backed president of Ukraine, Viktor Yanukovych, to release imprisoned political opponents.

The Irish former MEP has said he had no involvement with a group of former European politicians known as the “Hapsburg group” that were, it is alleged, secretly used by Paul Manafort, who later became Mr Trump’s presidential campaign manager, to lobby on behalf of Mr Yanukovych’s government.

The former Irish politician said that his 2012-2014 mission in Ukraine was opposed by Mr Yanukovych, describing it as a “stone in his shoe.”

Mr Cox said that in one face-to-face encounter with Mr Yanukovych the Ukrainian leader challenged his work to release prisoners with a report linked to a lawyer who has since pleaded guilty and is cooperating with the US investigation into Mr Manafort and his associates over their lobbying.

Mr Manafort was last week indicted on new charges of conspiracy, money-laundering, failing to resister as an agent for a foreign actor and lying over his work as a lobbyist for Mr Yanukovych’s party aimed at boosting his reputation in Europe and the US.

He denies all the charges taken in the investigation by US special counsel Robert Mueller, a former FBI director, into whether Trump campaign officials colluded with the Russians in influencing the 2016 election.

In a new indictment on Friday, Mr Mueller accused Mr Manafort and his former aide Rick Gates of secretly retaining “a group of former senior European politicians to take positions favourable to Ukraine, including by lobbying in the United States”.

At least four offshore banks were used to wire more than €2 million to the group, that were informally known as “the Hapsburg group” – a reference to the Habsburg royal dynasty.

One of the Washington lobbying firms hired by Mr Manafort, the Podesta Group, said last year that it arranged meetings for visiting European leaders about Ukraine that included Romano Prodi, the former prime minister of Italy, and the former Polish president Aleksander Kwasniewski.

Mr Kwasniewski and Mr Cox worked together on the Ukrainian mission to seek the release of opposition politicians Yulia Tymoshenko, Yuriy Lutsenko and Valeriy Ivaschenko on behalf of the European Parliament.

Mr Kwasniewski has said that he met Mr Manafort two or three times during the mission in 2012 and 2013 but that he never had a financial relationship with him and and has never heard of the Hapsburg group.

“I do all the work pro-bono so I am not paid anything for it. I do not do any meetings that there are not note-takers from the parliament staff because it is a parliament mission,” he said.

At one meeting with Mr Yanukovych, Mr Cox said that the then Ukrainian president pushed across the table “with a bit of a smirk on his face” a report by US law firm Skadden, Arps, Slate, Meager & Flom.

Mr Yanukovych was “pleased to tell” the EU mission that the report was compiled by former Obama administration lawyers at the firm, he said.

One of the firm’s associates Alex van der Zwaan (33), a Dutch lawyer at Skadden’s London office who worked on the report, has pleaded guilty to lying to prosecutors in Mr Mueller’s investigation.

Mr Cox said he would be happy to assist Mr Mueller’s investigation if requested.

“If he contacts me because he thinks I am involved in something I would be perfectly happy to give him access – or ask the European Parliament – to give him access to a 100 per cent totally and absolutely flawless creditable record of activity,” he said.

The Skadden report was commissioned for Mr Yanukovych, said Mr Cox, and “largely pointed out the futility in legal terms of what we were trying to do to release the prisoners”.

The report claimed that the trial of Mr Yanukovych’s political opponent Ms Tymoshenko – which she claimed was politically motivated – was justified and followed due process.