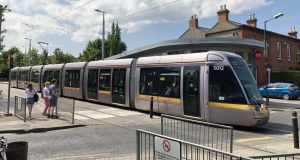 Luas operator Transdev has provided more than 100 cooler bags to tram drivers in an attempt to resolve a row over packed lunches which the company says could cost it up to €250,000. Photograph: Bryan O’Brien/The Irish Times.

Luas operator Transdev has provided more than 100 cooler bags to tram drivers in an attempt to resolve a row over packed lunches which the company says could cost it up to €250,000.

Siptu, which representing Luas drivers, claims its members on the Green Line can no longer bring lunch in as the food spoils as a result of work changes linked to the opening of the Cross City Line.

The Labour Court heard that drivers starting their day at the Sandyford depot are now required to take lunch-breaks at Broombridge in Cabra, which the union says means drivers have to carry their lunch with them in a warm cab for hours.

In an attempt to resolve the dispute, Kevin Foley of the Labour Court recommended that Transdev carry out a risk assessment to determine that cooler bags “are capable of transporting drivers’ packed lunches safely from one depot to another”. He noted that the court “would not normally concern itself with the functioning of cooler bags” but has done so in this case.

Siptu says the change is resulting in an increased cost to drivers as they no longer have the option of bringing packed lunches to work.

Siptu organiser John Murphy said he did not believe the bags would keep a packed lunch as fresh as it would be without spending three or four hours in a warm tram cab. He said Siptu wants Green Line drivers to be able to have their lunch at Sandyford.

“If the company could prove a cooler bag could resolve the issue it would have done so before now. I don’t believe that the cooler bags are practical,” he said, adding that take up of the offer of cooler bags by drivers had been poor.

He said the dispute could ultimately result in a ballot on industrial action by drivers as he expected a Labour Court proposal aimed at resolving the dispute would be rejected by drivers.

Transdev told the Labour Court that conceding to Siptu’s claim could cost it €250,000 a year and that cost increasing claims were not compatible with an agreement with the union dating back to 2016. The €250,000 figure relates to the amount it would cost to hire the five new drivers that would be necessary to allow everyone to have lunch breaks at Sandyford.

In its recommendation, the Labour Court said it was reasonable for a Luas driver to be expected to take breaks at a depot other than the one where their shift started.

A spokeswoman for Transdev confirmed the risk assessment on the cooler bags was underway.