Owner of apartment ‘not fit for habitation’ takes case against insurer 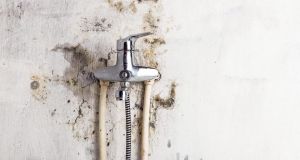 File photograph: The owner in question, who does not want to be named, said he first noticed a severe mould problem with his apartment shortly after he moved in, at the beginning of 2006. Photograph: iStock

An apartment owner in Co Clare is taking a High Court case against Homebond after the insurance company denied a claim for serious defects at his home.

The Ennis apartment owner has been left with a bill of €62,000 to make his home habitable after an engineer’s report found the severity of mould present posed a significant risk to human health.

The Ard Caoin development in Ennis was built by Michael Lynch Limited in 2005 and consists of 90 apartments.

The owner in question, who does not want to be named, said he first noticed a severe mould problem with his apartment shortly after he moved in, at the beginning of 2006.

He said he had to throw out a full wardrobe of damp, mouldy clothes . He said when he contacted the developer, it advised him to open his windows and gave him a dehumidifier.

In the years following this he said he threw out several more wardrobes full of clothes as well as curtains, mattresses and couches and had to re-paint the entire house eight times.

After being unable to resolve the matter with the builder, in 2010 he turned to Homebond, the firm which provides structural defect insurance for many new homes. Homebond sent an engineer to carry out an inspection of the site in both July and December 2010.

Following these inspections, Homebond sent a letter to the owner saying “no indications of water penetration were present on both occasions”.

However, it notes that “while signs of condensation may have been evident, this is not water penetration from an external source and therefore not covered under Homebond’s warranty”.

The warranty period for water penetration is five years from the date of issue, meaning it expired in December 5th, 2010.

After engaging a local solicitor to work on the case, the owner was advised to have an engineer carry out an inspection of the apartment.

In 2014 Galway-based engineer Brendan Slevin wrote that he had found “severe mildew formation,” a “serious ongoing problem of dampness” and water leaking into the flat through an external wall.

“The severity of the mildew is a risk to human health and the apartment is not fit for habitation in its present state,” the report states.

Mr Slevin goes on to say that the severe mould growth seems to be caused by “substantial deficiencies in the prevention of thermal (cold) bridging in the apartment”.

Thermal bridging is a construction term for heat loss in a building and it occurs when homes are not insulated properly.

The report also found that “wind driven rain is penetrating through the external wall and perlocating down into the ceiling”.

It recommended substantial remedial works to upgrade the insulation and ventilation in all of the walls, through a combination of pumping external cavities with insulation, dry lining the exposed wall and insulating the exposed balcony floor.

An extensive tender to complete all of these works and replace all mould affected finishings (such as the kitchen cupboards, skirting board, window frames, flooring etc) came to a total of €62,561 .

The owner’s solicitor – from Dermot G O’Donovan’s offices in Limerick – shared a copy of this engineer’s report with Homebond, and asked for Homebond to reciprocate and share its inspection reports, however Homebond declined.

In a letter to O’Donovan’s Solicitor’s office in April 2015, Homebond reiterated its stance that it would not be covering the damage and did not agree to arbitration.

In June 2015 O’Donovan’s wrote to Homebond informing it of Plenary summons in the High Court. They are awaiting a hearing date. Homebond did not respond to a request for comment from The Irish Times about this case.

Seamus Lynch, managing director of builder Michael Lynch Ltd, sent a lengthy response to The Irish Times, pointing out remedial work it had done in 2005 to resolve leaks in ground floor apartments.

“When Michael Lynch Ltd was on site, they noted that some of the owners had blocked up the vents with newspapers which reduced the air flow rates within the apartments.

“The Company engineer advised the residents that they should not block up the vents, especially when they are drying clothes in the apartment. The additional moisture within the house can create mildew or mould when the room is not being ventilated,” the statement said.

“As the estate was built on excess of 14 years ago, this falls well outside any defects liability period.

“In addition, Ard Caoin housing development is built in compliance with planning permission and building regulations at the time of the build, and has Homebond structural guarantees,” the company said.