Phil Hogan in line for trade portfolio at European Commission 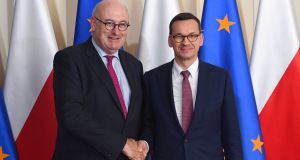 Irish European commissioner Phil Hogan is likely to be nominated to the powerful trade portfolio when the new president of the commission Ursula von der Leyen names her team on Tuesday.

Mr Hogan’s name has been linked to the trade job since he was nominated for a second term by the Government in July.

However, The Irish Times understands that Mr Hogan has been allocated to the trade portfolio in a draft list of proposed appointments circulated in Brussels.

While objections from national governments are still possible, and the list of commission appointments must be approved by the European Parliament, Mr Hogan would be almost certain to get the job if nominated by Ms von der Leyen on Tuesday.

The appointment would be viewed as a significant signal to the British government, as Mr Hogan would be responsible for overseeing any negotiations with the UK on a future trade deal – the next phase of Brexit negotiations if there is an agreement on an orderly British withdrawal.

Commissioners act on behalf of the EU and not their national member states, and take an oath to that effect. However, it is accepted that they are mindful of the interests of their own countries, even if they do not always agree with their government.

The trade portfolio is one of a handful of commissioner jobs with significant clout, and is one of the most sought-after positions. It reflects Mr Hogan’s stature as a heavyweight of the new commission.

Mr Hogan has served as agriculture commissioner for the past five years, having been nominated by former taoiseach Enda Kenny in 2014. At the time, he left behind the water charges controversy to take up the Brussels appointment, which is always regarded as one of the most desirable jobs in any government’s gift. He had as minister for the environment introduced the charges and led the government campaign in favour of them despite widespread opposition.

A sometimes abrasive political figure at home, Mr Hogan is also a deft political strategist who was a key figure in Mr Kenny’s rise to power. In recent years, the bruiser side of his political persona was less in evidence as he took to the high politics of Brussels with enthusiasm. However, it surfaced again in his defence of the Mercusor trade deal with South American countries, which has been hugely unpopular with farming organisations at home.

The commission is the policy engine of the EU, and also serves as the guardian of the EU treaties. It shares power with the parliament and the member states, who act through the Council of Ministers (in which ministers with the same domestic portfolios meet) and the European Council, the group of heads of government which meets for regular summits in Brussels. Each country has the right to nominate one commissioner, though many of the portfolios carry little real power.

The new commission will take office on November 1st, assuming it has been approved by the European Parliament.