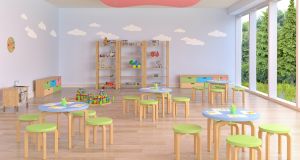 With children due to attend several different primary schools, lots of them won’t see their pre-school friends again

It’s a rare year that we don’t have some milestone event due to occur in this house - not always an easy thing to have to deal with when you’re prone to oversentimentality like I am.

None of the children have been cursed with such an affliction, except maybe for the middle child, so the rest of them remain frequently bemused or embarrassed by my reactions to major events in their lives.

This year the expected milestones were thin on the ground. The second child was due to sit his Junior Cert which, thanks to Covid-19, has now been cancelled. He’s probably the only one in the family who has something to be grateful to the pandemic for. The baby of the family, however, was due to have his final day Montessori and begin “big school” in the autumn. The enormity of it all means nothing to him. The mention of it is enough to make me well up. It’s a day I never really saw coming because having so many children meant, until now, there was always a next in line.

As it turns out, it’s a day I won’t see coming now either. With schools and colleges set to remain closed until September and October, and childcare facilities opening much later in the summer, child seven has already had his last day in pre-school, and it went unmarked.

I’ll remember it as the surreal day the Montessori teachers handed our little ones back to us, wondering if they’d return before the Easter holidays. The said little ones, meanwhile, were waving goodbye to each other in their usual excited fashion unaware that they wouldn’t see each other again in a pre-school setting. With children due to attend several different primary schools, lots of them won’t see each other again.

Parents: How do you think your kids are coping with lockdown?

I thought I had my feelings about it all under control, until a mother from the pre-school class posted a picture of her little boy looking in the pre-school window, wishing he was back there. My heart sank at the image.

Most of my children were crestfallen to hear that the schools would not return until the next academic year. And I was almost as sad for them. In the midst of all that’s gone on, our children have had little choice but to take it on the chin. I can’t help but feel as if they are being forgotten about in all this, in spite of the fact that they’re making huge sacrifices too. While I know my children miss their friends and teachers hugely, I am very relieved and grateful not to have either a sixth class or sixth year student this year. To miss school in the ordinary sense is one thing. To deal with the uncertainty of State exams and miss the rites of passage that come with those final months in both primary and secondary school is another thing entirely.

“They’re the best months of your school life” my eldest said as we reminisced about this time last year, when I made a holy show of her by snotting and sobbing my way through her graduation Mass song. “A parent’s prerogative,” I insisted, ignoring the fact that I was the only one with panda eyes, crying an actual river.

For mine there are other aspects of school to be missed. Even I if were to manage homeschooling more successfully (or at all), it wouldn’t come close to bridging the gap. There are some feeling the impact more than others. School is about so much more than education and for all my frustrations with trying and failing to manage, I’m very much aware that mine are amongst the lucky ones. Mine are safe at home. That’s not the case for every child.

May 18th is circled on our calendars. It was circled long before the Taoiseach announced it as the date restrictions would slowly start to ease. It’s the first of four birthdays in the space of three weeks and child three has been on countdown for months now.

He’s a great man for the hints, so we’re never short of ideas for birthday presents. But there’s one we can’t deliver on this year, and that’s his hope that he could have returned to school before the summer holidays. He’s old enough to understand, but that doesn’t remove my deep-rooted desire to compensate. We’re far from family so there can be no socially distant visits from the end of the driveway. It’s enough to guilt me into baking.

An unforgettable birthday is already guaranteed - I want to make sure it’s for the right reasons.

Palmerston Road redbrick brings its A game for €3.25m
5

SVP to raise €650k from sale of donated Ranelagh house
9