Over 150 Dublin Ryanair flights among month of cancellations

Ryanair chief executive Michael O’Leary has apologised to more than 300,000 people who will be directly impacted by the airline’s rolling programme of flight cancellations. 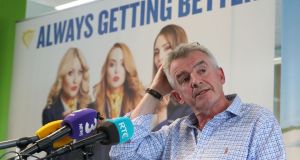 Ryanair boss Michael O’Leary during a press conference in Dublin where he has admitted the cancellation of flights due to pilot holidays is “a mess”. Photograph: Niall Carson/PA Wire

Ryanair has released a full list of flight cancellations up to October 22nd, including more than 150 flights to and from Dublin airport and about 50 flights per day across Europe.

Ryanair chief executive Michael O’Leary earlier apologised to more than 300,000 people who will be directly impacted by the airline’s rolling programme of flight cancellations and to the 18 million passengers who have seen a cloud of uncertainty hang over their travel plans since last Friday.

Mr O’Leary cut a contrite figure during a press conference at the airline’s headquarters in Dublin on Monday afternoon and said that the company would be paying out compensation to passengers who qualify under EU rules without quibble.

He said that 75 per cent of all impacted passengers would be accommodated on flights leaving on the same day as their cancelled flights. Ryanair has published most of its cancelled flights (see full list below) .

The airline plans to cancel between 40 and 50 flights a day for up to six weeks but up until now it has only been giving information on the cancellations a couple of days in advance.

Mr O’Leary said the company took a decision on Friday afternoon to cancel flights because the over the previous nine days punctuality fell from around 90 cent to less than 70 per cent.

He said the thinking behind the cancellations was that it was better to disrupt 2 per cent of passengers by cancelling their planes than up to 45 per cent who would otherwise have faced significant delays.

He denied the airline was short of pilots or that a large number of pilots had joined other airlines.

“Yes it was short notice and yes it was unexpected and for that I sincerely apologise,” Mr O’Leary said.

He added that the airline had spent most of the weekend trying to establish which flights it could cancel that would cause the lesser disruption.

He said that reputational damage had been done to the company and committed to “trying to do better. He estimates that it would cost the company around €25 million, about €5million in profits over the next six weeks and up to €20m in compensation.

“I want to apologise to the 300,000 or 400,000 customers who have had flight cancelled and to the 18 million customers who were concerned or worried over the weekend,” he said. “We did not focus on the concerns or the worries of customers. I say sorry. We want to put her hand when we make a mess.”

He denied that it was the biggest “cock up” of his more than a quarter of a century at the helm and said he did not expect to lose much business as a result . “The reality is when you’re flying somebody else you are paying far more money for the privilege are you will have to put up with more delays.

When asked if he would resign he said no. “I don’t think my head should roll, I need to stay here and fix this.”

Mr O’Leary said the flight cancellations were “clearly a mess” .

“It is clearly a mess but in the context of an operation where we operate more than 2,500 flights every day, it is reasonably small but that doesn’t take away the inconvenience we’ve caused to people,” Mr O’Leary said.

He said the problems were not the result of pilots quitting but was “because we’re giving pilots lots of holidays over the next four months.” Every passenger who is entitled to compensation will receive it in full, he added.

Mr O’Leary said the issue would not recur next year .

“This issue will not recur in 2018 as Ryanair goes back onto a 12-month calendar leave. Ryanair is not short of pilots - we were able to fully crew our peak summer schedule,” O’Leary said, adding that the disruption was a “mess of our own making.”

The list of flights to and from Dublin was released tonight for September 25th to October 22nd as follows:

Six flights in and out of Dublin were cancelled on Monday, which were the Amsterdam, Bristol, Barcelona, Brussels, Manchester and London Gatwick routes.

Ryanair has published a list of all cancelled flights up to Wednesday, September 20th on its website.

Ryanair has lost as much as €2.1 billion of its market value since the middle of last week, as the carrier’s move to cancel flights added to the impact of news last week of a potentially costly European court ruling.

Speaking on a call with analysts, Mr O’Leary said while the airline does not have a pilot shortage, other airlines are poaching pilots.

As a result, the company plans to introduce pilot loyalty bonuses in an effort to keep its crew.

Fifty-five Ryanair flights that were scheduled to fly on Tuesday have been cancelled, including six flights departing from and arriving in Dublin.

Fifty-three Wednesday flights have been cancelled by the low cost airline, eight of which were due to arrive in and depart from Dublin.

The four cancelled Wednesday routes leaving and arriving in Dublin are to and from Amsterdam, Bristol, Paris Beauvais, and Manchester.

Ryanair has advised passengers that their flights are operating as usual unless they have received an email informing them otherwise.

The disruptions to its flights schedule will affect thousands of travellers, including some who are abroad and are expecting to return home with the airline.

Cormac Meehan, president of the Irish Travel Agents Association, said Ryanair must publish the full list of flights it intends to cancel to give passengers sufficient warning.

Mr Meehan said the problem with pilots’ holiday rosters had been “coming down the tracks” for the airline for some time and “nobody blew the whistle.”

He was speaking on RTÉ’s Morning Ireland.

Mr Meehan said Ryanair must adhere to a “firm interpretation” of EU consumer legislation, according to which it should offer passengers whose flights have been cancelled seats at the “earliest opportunity” on the next available flight.

A spokesman for Ryanair issued a statement as the news of the airline’s plans broke on Friday, which said:

“Ryanair apologises sincerely for the inconvenience caused to customers by these cancellations. Customers will be contacted directly about this small number of cancellations and offered alternative flights or full refunds.”

The flight cancellations are due to a change in the way Irish airlines record pilots’ flight hours for EU rules. A pilot can only fly 900 hours a year, and 100 hours in any one month.

The Irish Aviation Authority for the past decade interpreted EU regulations differently from other member states, and recorded pilots’ annual flight hours for the year from April.

The changes, which were well flagged by the EU aviation body, have lead to many Ryanair pilots having hit their annual number of flight hours in September and during the summer.

The Commission for Aviation Regulation, which oversees air passenger rights, said it was expecting a high volume of claims for compensation from travellers affected by the cancellations.