Orange Order in talks with UK officials over Drumcree dispute 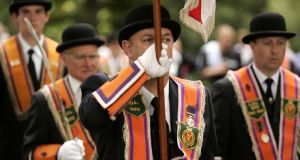 The dispute centres around the Parades Commission ban on the Orange Order marching to and from the Church of Ireland church at Drumcree in Portadown. Photograph: Dara Mac Dónaill / The Irish Times

Orange Order leaders have held talks with British government officials as the Drumcree dispute approaches its 21st year without any progress in sight.

Portadown district lodge asked for a meeting with Secretary of State Karen Bradley after accusing the Parades Commission, the regulatory body which governs parading, of failing to meet them since last year’s 20th anniversary march.

The dispute centres around the Parades Commission ban on the Orange Order marching to and from the Church of Ireland church at Drumcree in Portadown along its traditional route, part of which goes along the mainly nationalist Garvaghy Road.

The Orange members were last allowed to complete the controversial Sunday morning parade in 1998, after several years when the turmoil generated by the standoff brought Northern Ireland to a standstill.

Every Sunday the lodge stages a token protest after morning worship at the Church of Ireland church in Portadown, with up to 20 members taking part.

A lone PSNI officer waits a short distance from the church and hears a verbal protest from the lodge at being unable to complete their traditional route. But this Sunday (July 7th), the numbers are expected to swell to more than 300 along with two bands.

In its latest determination, issued this week, the commission again banned the parade from its former route. It said the parade retains the “potential for public disorder” and to damage community relations “in the immediate vicinity of Portadown, and across Northern Ireland”.

But the reality is that for most of the North, and even within large parts of Portadown itself, Drumcree is a dead issue.

Orange district master Darryl Hewitt says that, to the extent the commission and the Northern Ireland Office appear to have an overall strategy, it appears to be to wait until the protest dies off.

Yet of the 20 or so people who turn up every Sunday most are in their 60s and 70s and unlike past years, there are very few visitors from elsewhere to show support.

In the run-up to this Sunday’s event, district officials including Mr Hewitt were invited to a meeting with NIO officials.

A spokeswoman for the NIO confirmed the meeting but declined to comment on any details.

She added the meeting was “at their request, as part of [our] regular engagement with community organisations across Northern Ireland”.

The NIO was also unable to confirm it had met representatives from the Garvaghy Road Residents Coalition, which the commission says now wants to negotiate on a number of other controversial issues in the town including a Junior Orange march and an Orange arch in the nearby Parkmount area.

Mr Hewitt insisted, however, the focus must remain on the Garvaghy Road and the completion of the parade put into suspension 21 years ago.

“We have no intention of giving up on pressing our case. It is all we can do,” he added.

“After our 20th anniversary protest last year the commission told us they would be in contact, but this never happened. This new commission is even worse than the last. All we get from them is a shrug of the shoulders.”

The commission said it is bound by confidentiality rules which prevent it from disclosing any details of any meetings. All evidence presented, it added, is confidential.

A spokesman added, however: “The commission is available all year round to hear representations including in relation to the Drumcree dispute. Last June we contacted all interested parties.”