Only 40% of fathers availing of paternity benefit, figures show 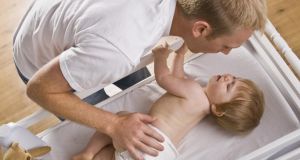 In total, 55,652 fathers have availed of paternity benefit since the programme’s inception in September 2016. Photograph: iStock

Only about 40 per cent of men who have just become fathers are availing of paternity benefit, new figures released by the Department of Social Protection on Wednesday show.

This is a slight increase in uptake compared with statistics released for 2017. However, with annual birth rates in Ireland running at approximately 60,000, the figures show that more than half of fathers are still not availing of the benefit.

Paternity leave can be taken at any time within the first six months following a birth or an adoption, and is also available to same-sex couples.

The scheme was launched in September 2016 and the payment will be increased to €245 per week from the end of March, as provided for in October’s budget.

Allowing parents greater time with a new baby will be beneficial to children, families and society as a whole

Commenting on the figures, Minister for Social Protection Regina Doherty said in a statement: “I am delighted that the relatively recent paternity leave is proving so popular. This is not just good for dads but improves the quality of life for all the family.

“I would encourage working parents, both employees and self-employed, who are expecting or adopting a new baby to avail of their PRSI and to take their paternity leave,” the Minister added.

“The first 12 months of life are incredibly formative for a child and the benefit of allowing parents greater time with a new baby will be beneficial to individual children, families and society as a whole.”

In total, 55,652 fathers have availed of paternity benefit since the programme’s inception in September 2016.

Those applying for the paternity benefit payment must sign up for the Government’s MyGovID online account and get a public services card.