One season of rugby enough to cause brain damage, expert says 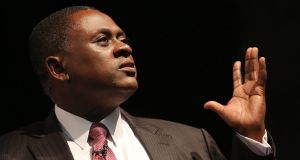 Competition or “winning a game” should not be placed ahead of the life of a child, international concussion expert Dr Bennet Omalu has said.

Dr Omalu, a forensic neuropathologist, has called for high-contact sports such as rugby, mixed martial arts and American football to be banned for under-18s.

“To win a game, to win a league, should not be considered something more valuable than the life of a child,” he said during a talk organised by the Royal College of Surgeons in Ireland on concussion in sport on Tuesday evening.

“The truth in this instance is that where there is an activity where the side of the head is exposed to repeated blows, there is a 100 per cent risk exposure to brain damage – that is a fact.”

Ahead of the talk, Dr Omalu said the question people must ask was “When we play rugby, is our head exposed to repeated blows? The answer is yes. So if it does, there is a risk of permanent brain damage, so should children play it? No. The truth is inconvenient.”

He said that “for every other dangerous factor in life, like cigarette smoking, we have legislative tools to protect children”.

“If your eight-year-old son comes to you and tells you, ‘Daddy, I want to smoke . . . cigarettes,’ what are you going to do?” he said.

Dr Omalu said that “after only one season of rugby, your child may have suffered brain damage” as the human brain does not have any reasonable capacity to regenerate itself.

“Once you have suffered a concussion, it’s going to stay with you your entire life. There is nothing mild about a concussion.”

Dr Omalu’s research has been focused on examining the effect of playing high-contact sport and collisions on the human brain. The Nigerian-born doctor is now based in the US and is credited with increasing the understanding of the effects of contact sport on brain injury and diseases such as dementia.

Dr Omalu’s work led to the discovery of a brain disease – chronic traumatic encephalopathy or CTE – which is caused by repeated collisions to the brain.

His work featured in the film Concussion, in which he was played by Will Smith. The Royal College of Surgeons will be awarding Dr Omalu an honorary doctorate on Wednesday.

Responding to Dr Omalu’s research, Dr Rod McLoughlin, medical director of the IRFU, said “player welfare is the number one concern” for the Irish rugby authority. “Concussion is an issue. We’re not trying to hide this; we’re acknowledging it and introducing education, research and rule changes where appropriate,” he said. “The IRFU is involved in eight concussion-specific research studies at the moment.”

Former Irish rugby international Bernard Jackman said it was important that “we understand the risk, but we understand the potential rewards from team sports, like improving self-esteem and other health benefits”.

The RCSI panel also included Ireland’s first women’s MMA world champion and UFC fighter Aisling Daly, who had to retire from the sport this year due to an abnormality found in her brain, and has since founded the group Safe MMA Ireland. She said, “The focus needs to be on each individual governing body in each sport on addressing the risks rather than burying their heads in the sand, so every sport can be made as safe as possible for kids teens and adults”.