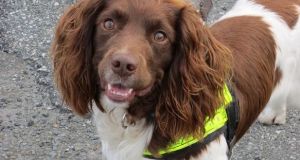 Detector dog Alfie who found the tobacco in a truck at Rosslare Europort. Photograph: Revenue/Twitter

More than two tonnes of smuggled tobacco has been found in a truck after it was checked by a sniffer dog in Rosslare.

The Polish-registered lorry, which was supposed to be carrying a cargo of plastic, was stopped at Rosslare Europort after driving off a ferry from Cherbourg in France.

Revenue, assisted by detector dog Alfie, seized over 2 tonnes of tobacco worth more than €1m at Rosslare Europort https://t.co/wM3YePwwVl pic.twitter.com/eyLFOWscuz

The illegal tobacco had a retail value of more than €1 million and if sold it would have resulted in a loss to the exchequer of about €800,000, the Revenue service said.

The agency said officers seized the contraband and impounded the vehicle after it was stopped and searched in a routine operation with the assistance of detector dog Alfie.

Revenue said the driver, a man in his 40s, was questioned and investigations are continuing with a view to prosecution.