Drugs worth €107,000 found after man searched in Cork train station

Cocaine and heroin seized as part of ongoing operation 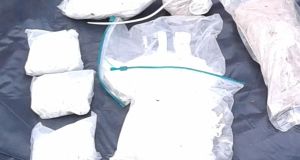 The man in his 30s was stopped and searched in Kent Station. File photograph

A man in his 30s was arrested and drugs worth more than €100,000 were seized in Kent Railway Station in Cork on Wednesday evening.

Gardaí said the seizure was part of an ongoing operation into the sale and supply of drugs in the Mayfield area of the city.

“ Gardaí from the Divisional Drugs Unit in Cork City stopped and searched a man. During the course of the search, €105,000 worth of heroin and €2,000 worth of cocaine was seized. The suspected drugs will now be sent for analysis,” a Garda statement said.

The man was brought to Mayfield Garda Station where he was being detained under Section 2 of the Criminal Justice (Drug Trafficking) Act 1996.