Video footage shows a van which may have been used in a gun attack on a man in Lucan on fire in the Elm Way estate, West Dublin. The victim has survived the shooting but has been described as gravely ill. Video: Chris Brady 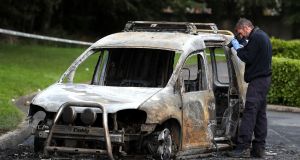 A firearm was discovered in the burnt-out shell of one of the vehicles, found on a nearby estate. Photograph: Brian Lawless/PA

Gardaí are trying to establish if the attempted murder of a man shot repeatedly in Co Dublin on Wednesday was linked to a gun killing in the city earlier this year.

The latest victim (42) was shot in his car by criminals who appeared to be waiting for him close to his home at Griffeen Glen Park, Lucan.

Gardaí believe the victim’s car was rammed by a van used by his would-be killers before a gunman fired up to 10 shots into the victim’s Toyota car at 1.50pm. Most of the shots were fired at him through the driver-side windscreen.

A group of children were holding a PE class beside the attack scene and others were returning home from school at the time.

Despite being wounded several times in the arms, upper body and face, the victim ran to the house of a neighbour for help.

The van, used to ram the victim’s car up onto a grass verge, and another vehicle were found on the nearby Esker estate in Lucan. A firearm was discovered in the burnt-out shell of one of the vehicles.

The victim was taken to Connolly Hospital, Blanchardstown, where his condition was last night described as critical.

Lynch was involved in the drugs trade and money laundering and was known to the man shot yesterday.