Olympic skiing: a sport of speed and calories

With metabolisms in overdrive, cross-country skiers must consume 8,000 calories a day 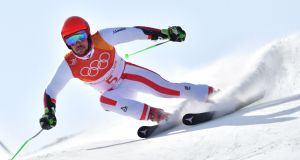 Austria’s Marcel Hirscher at the Pyeongchang 2018 Winter Olympic Games: what does it take to consume 8,000 calories – the equivalent of about 20 plates of lasagna – every day? Photograph: Dimitar DILKOFF/AFP/Getty

For cross-country skier Martin Moller, the biggest challenge of his sport is not the freezing cold, the hundreds of hours of training or the gruelling toll of competition. It’s eating. And eating. And eating again.

“I actually do get tired of eating,” said Moller, who lives in Greenland and skis for Denmark at the Olympics. “I always have to be thinking about what I will eat in two hours.”

Few sports ask as much of the human body as cross-country skiing, which engages virtually every muscle group – legs, arms, abdominals, back – for hours at a time.

One of the enduring images of the long-distance cross-country events is the sight of athletes collapsing at the finish line.

That scene will no doubt repeat itself on this final weekend of the Pyeongchang Olympics as the men and women compete in their respective long-distance events – 50km for the men and 30km for the women. Skiers can train four to five hours a day at their peak, covering 60km or more and pushing their bodies to the limit. As a result, cross-country skiers, on average, also have the biggest fuelling demands of any Olympic athletes – winter or summer. While other sports certainly have their big eaters (Michael Phelps was famous for his enormous meals, which were not typical for most swimmers), scientists say the effort to stay in calorie balance is most daunting for cross-country skiers.

A typical elite cross-country skier will burn about 30 calories a minute during training – by comparison, a 155lb (70kg) person on an elliptical machine burns about 11 calories a minute. Research has shown that a typical male elite cross-country skier must consume 7,000-8,000 calories a day – more than three times the caloric needs of an average male – to meet the energy demands of the sport. Female elite skiers must eat about 3,500-4,000 calories a day – about double the calories consumed by the average woman. (A Swedish study found that during the hardest training days it can reach 8,126 for men and 4,780 for women – about double the calorie needs of Kenyan marathon runners.)

What does it take to consume 8,000 calories – the equivalent of about 20 plates of lasagna or 40 scoops of ice cream – every day? For cross-country skiers, who often have slim builds and limited stomach capacity, it means eating several times a day, and often planning their schedules around their constant meals. Many have tricks to help them fuel – they eat mashed foods, high-calorie bars, calorie-laden sports drinks; they carry backpacks full of beef jerky and almonds, and they always take dessert.

“I’m laughing about it and at myself because it feels normal,” said Caitlin Patterson (28), a US skier who finished 34th out of 62 in the 15km women’s skiathlon. “It is something we think about a lot of the time,” she said, as she snacked on beef jerky after a workout at the Olympic cross-country centre. “It’s an important part of your job because fuelling is so important for your physical performance.”

Patterson, who is 5ft 9in and about 132lbs, estimated she takes in up to 3,500 calories a day depending on her training level. Fuelling starts with a breakfast of two eggs fried in butter topped with melted Vermont Cheddar, plus two pieces of toast with jam and no guilt. “It’s a good combination of the nutrients that I need to get through the training,” she said.

After morning training she quickly eats about 300 calories in snacks – beef jerky, almonds, a few Fig Newtons and maybe an orange. She eats lunch when she gets home. A big salad with maple-mustard dressing, a grilled cheese sandwich or quesadillas, followed by a cookie or a bowl of Ben and Jerry’s milk and cookies ice cream. After a few hours’ rest, it’s time to start thinking about eating again for her afternoon training.

Dr Ola Ronsen, chief medical officer for the Norwegian Ski Federation, said that on many days the athletes simply cannot eat enough. Research has shown some may fall as much as 1,000 calories short of their body’s daily needs. As a result, it is important they keep up the same eating routine on their days off to make up the deficit.

The problem, said Ronsen, is that many athletes feel full before they have entirely replaced the energy loss of training. “When you train you take a lot of energy from the muscles,” he said. “But when you are replacing that, you’re using your stomach and gut to process the food before it’s brought back via circulation to your muscles. You’ve filled up your stomach, but feeling full is not always a reliable signal that it’s enough for the muscles to replace the glycogen.”

During weeks of strenuous training during the season, the athletes are pushing so hard that their bodies begin to release hormones that suppress appetite, making it an even bigger challenge to get the necessary nutrients. “If you come to a point where the training is so hard your desire to eat goes down, that’s a critical balance,” Ronsen said. “It’s a delicate situation. You really have to force yourself to eat even though you don’t feel like you are hungry anymore.”

Susie Parker-Simmons, a senior nutritionist for the US Olympic Committee, said that meeting the calorie demands of the sport could be especially challenging for women, who can lose their menstrual cycle and bone mineral density if their eating falls behind.

“It’s just so hard to get that amount of calories in,” she said. During a team event in Switzerland, she worked with the athletes to help them fuel, recommending that they take in calorie-dense foods – like sports drinks and gels, smoothies and peanut butter and jelly sandwiches – right after training.

“They said, ‘If you come look after us, we’ll just eat or drink what you give us,’” she said of the US skiers. Linda Bakkman, a sports nutritionist with the Swedish Olympic Committee, said that even Olympic athletes had to contend with cultural biases around eating high-calorie foods. “You can’t meet the energy requirement of being a cross-country skier with salad,” she said. “There is an educational challenge.” – New York Times