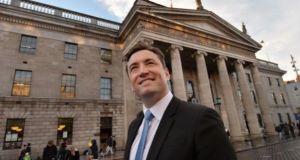 John Concannon is the director of the Strategic Communications Unit. Photograph: Alan Betson

Fianna Fáil and Labour have called for the Government’s Special Communications Unit (SCU) to be disbanded arising from the controversy over newspaper ‘advertorials’ promoting Project Ireland 2040.

Labour leader Brendan Howlin said the SCU had used public money for partisan advertisements that had been used for the sole purpose of promoting the Government.

Similarly, Fianna Fáil communications spokesman Timmy Dooley said it had become very clear to him that the purpose of the SCU was to thwart the role of the independent media and bypass them with advertising that was not clearly labelled, and to promote the Fine Gael-led Government.

Mr Howlin was particularly critical of the fact that Taoiseach Leo Varadkar announced a review of the SCU during the height of Storm Emma.

“I noted that having spent the week defending his SCU that he chose to make the announcement of a review on the day we faced our most serious weather challenge for 40 years. It seems that the spirit that gave rise to the SCU is, in that sense, alive and well,” Mr Howlin said.

“Let’s call a spade a spade - this review is a nonsense. It is ridiculous that the Taoiseach should seek a review conducted by his most senior civil servants into an entity established at his direction and by those same civil servants,” he said.

Mr Dooley said Project 2040 suggested to him the aim of the SCU was to “somehow thwart the efforts of an independent media to hold a government to account”.

He said that the instruction to some newspapers by the media agency Mediaforce not to use words such as “advertorial” or “special feature” was an attempt to effectively “dismantle” the barrier between ordinary editorial copy and advertising copy.

He questioned how the agency came to issue such instructions.

When asked if the banner that said “in partnership with the Government of Ireland” performed that function, Mr Dooley argued the contrary was the case and the banner made it even worse.

“When does a government enter into a partnership with the media?” he asked. “The admission of that in itself is really the smoking gun as far as I am concerned.”

He also expressed concern a small number of regional papers featured photographs of general election candidates in the advertorials, saying that should not have been allowed to happen.

Mr Howlin, in his statement. said Mr Varadkar had handpicked the director of the SCU, John Concannon. He said his objections to the SCU were not simply about the advertorials.

“It is not simply the nature of the advertorials that are at issue here, though they have been deliberately deceptive - to the point in some cases of effectively acting as donations to the Fine Gael party.

“It is simply the sheer scale of the operation envisaged. A five-person unit mushrooming into a 15-person unit. No additional cost then became a €5 million budget, while €1.5 million is committed to promoting a Government plan, decided by Fine Gael with which the Opposition have highlighted many problems.”

He said Mr Varadkar’s defence that Fianna Fáil had done the same with its national plan in 2007 was “deeply disturbing” as it set at naught the reforming measures of the past decade.

Mr Varadkar announced on Thursday night that his Department’s secretary general Martin Fraser would carry out a review of the unit.

The Government also released a summary of the guidelines issued by the SCU to the media agencies.

It said there was a requirement to display the label: “In partnership with Project Ireland 2040, an initiative of The Government of Ireland.”

According to the statement: “This ensured that readers knew that it was paid-for content.”

It continued that the only requirement for the partnership was that the facts of the development plan were covered. Each newspaper was provided with a “bundle” of information drawn from the plans, which was relevant to their local readership.

The statement said that no politicians were recommended for interview.

No pictures were supplied, nor was there any instruction on what photographs be used. It was a matter for each newspaper to choose its own photographs.