‘We don’t see a Beast from the East, we see a bit of snow and we laugh at it’

Tourists in Dublin were in good spirits as most of Dublin's attractions remained closed due to Storm Emma. 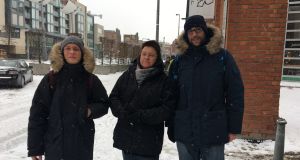 Frosty reception: Disgruntled tourists Gregor Hohmann, Sigrid Stiera and Alexander Lunte from Germany. “The archaeology museum is closed. Why? It is inside for God’s sake,” says Hohmann. Photograph: Conor Pope

As the centre of Dublin settled under a blanket of icy white on Thursday morning, a German tourist standing in Smithfield Square is seeing red.

“We have so much anger towards Ireland right now,” says Gregor Hohmann. “We always thought people here were strong and brave but what happens when you get a little bit of snow? Everything is closed.”

Hohmann and two of his fellow countrymen had travelled to Ireland from Borkum, a small island off Germany’s northern coast, on Monday for a week-long holiday.

The archaeology museum is closed. Why? It is inside for God’s sake

The itinerary had been carefully drawn up but as the week progressed, and the Beast from the East took hold, their plans started to unravel.

By Thursday Hohmann had had enough. He and his friends were due to go to the Natural History Museum, but it was closed. They then decided to walk from the centre of the city to Smithfield for a tour of the Jameson distillery, but it was closed.

He isn’t done letting off steam. “Do you know what? We don’t see a ‘Beast from the East’, we see a bit of snow and we laugh at it. We are not afraid of 100km/h winds, we laugh at them. We have lost two days of our holiday because of the weather. The weather. That’s just insane. It just makes no sense to me.”

Shay Kirwan, who owns a shop on Manor Street in Stoneybatter, is not giving out about the weather. He is absolutely delighted with it. He was barely open an hour and almost all the snow shovels he had the good sense to bring down from Northern Ireland earlier in the week were gone. The grit he had bought had disappeared from his shelves faster than loaves of bread from the local Tesco.

“I was reading all about the weather last week,” he says. “I bring a lot of stuff down from the North so I asked my guy there if he had any salt I could sell. He had all these 10kg buckets left over from 2010 and I took them all, for €2 a pop. I sold them for €6. They’re all gone. And I am selling the shovels for €12. I had 36 and I have only three left. I sold six in an hour this morning.”

Around the corner from Shay’s Shop, on North King Street, stands a forlorn looking man knocking on the window of Delaney’s pub. On a typical Thursday morning business would be brisk for the early house, but the shutters were down and the doors were closed.

“I was just going in for a quick pint,” the man says. “At least that was the plan.”

News that normal pub opening time was just minutes away is of cold comfort to him. “Ah if this place is closed they’ll all be closed,” he says. “That’s life I suppose.”

With most people heeding official warnings to stay home, and with most shops, pubs and restaurants closed, the streets around the north inner city were eerily quiet.

I really think the colour coding system creates a bit of hysteria. People hear red and suddenly everything closes

Conor Higgins of the Oxmantown cafe on Mary’s Abbey just off Capel Street decided to open his doors for the handful of people at work in the nearby fruit market and any regulars who might arrive.

“It is a bit of a service more than anything else, to be honest,” he says.

He is unconvinced by the official response to the snow storms and the declaration of the most severe weather alert in the land.

“I don’t think this is any worse than the snow in 2010 and I didn’t miss a day’s work back then,” he says. “I really think the colour coding system creates a bit of hysteria. People hear red and suddenly everything closes. I think its generate a bit of unnecessary panic.”

Another business that had chosen to remain open was the nearby Leprechaun museum. “People need to hear stories even in the snow and that is what we do,” says Tom O’Rahilly, as he sweeps the entrance clear of snow. “We were busy yesterday but I don’t think we will be today so we’ll probably close around lunchtime . . . We walked in and will walk home. Sure why wouldn’t we?”

A man wearing Alpine gear purposefully passes the Leprechauns and O’Rahilly but he pauses at the Second Abbey second-hand shop on Mary’s Abbey. He stares in the window at a pair of skis that stand along side the books and bric-a-brac.

1 How one couple’s weekend away resulted in 30 Covid-19 cases
2 Taoiseach tells TD to ‘cop on’ over criticism of contact tracers asking about pubs
3 Miriam Lord: Government’s latest comedy of errors offers little to laugh about
4 Coronavirus: 429 new cases as vigilance urged amid rises across the country
5 Colleges may have to create 1,000 extra places after Leaving Cert errors
Real news has value SUBSCRIBE