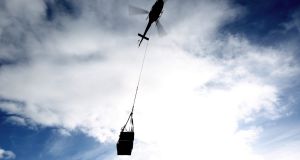 An Airbus A350 Helicopter, piloted by Brad Lake, removed oil barrels and other waste from the MV Alta off the coast of Ballycotton, Co Cork on Wednesday. Photograph: John Hennessy

Over 90 oil barrels have been removed from the “ghost ship” MV Alta, stranded near Ballycotton in East Cork during Storm Dennis.

Air services company, PDG Aviation successfully removed the barrels from the deck of the ship using a helicopter.

Its pilot Brad Lake moved 62 full barrels and 33 empty barrels from the deck of the ship on to a specially constructed drop off area on shore. The “aerial crane operation” took several hours to complete.

The barrels were then transferred from the drop off area to a truck and removed by an environmental agent with most of the oil being recycled and used to make tar for road surfacing.

Cork County Council engineer, Kevin Morey confirmed said as a further precaution against pollution, the council has left oil absorbent pads and booms at some locations on board the ship where there could be residual seepage from pipe systems which have been drained.

He said PDG Aviation, which is headquartered in Inverness, Scotland, already works in Ireland where it has a contract with the Commissioner of Irish Lights to call to lighthouses around the Irish coast.

Meanwhile, Mr Morey paid tribute to all involved in the operation, including the council’s staff.

Mr Morey said the council is now effectively closing down the wreck with the removal of the pilot ladder. This had been used by marine contracting staff to access the vessel and carry out an assessment of the pollution risk.

The 77-metre ship, having no cargo and with any significant documentation and equipment removed, is now essentially empty and the council has also removed any other access arrangements to make it inaccessible.

“Cork County Council continues to ask members of the public to stay away from the wreck location as it is located on a dangerous and inaccessible stretch of coastline and is in an unstable condition and on private property.”

The fate of the ship and whether she will be removed from the rocks at Ballyandreen now lies with the Receiver of Wrecks. Appointed by the Revenue Commissioners, the receiver is continuing to try to establish ownership of the vessel.

The MV Alta was abandoned by its crew of ten in October 2018 when it became disabled en route from Greece to Haiti. They and were rescued from the ship by the US Coastguard some 1,380 miles south east of Bermuda.

The 44-year-old ship continued to drift eastwards and the Royal Navy ice patrol ship, HMS Protector came across it off Africa on August 30th, 2019. The Royal Navy attempted to make contact with the ship but received no response and it continued to drift eastward before coming to lodge on the rocks at Ballyandreen near Ballycotton on February 16th.

1 People should carry ‘evidence’ of travel reasons if exceeding 2km limit
2 Coronavirus: Ten more deaths confirmed in Republic
3 Coronavirus: Husband unable to say farewell to wife of 51 years
4 Trump boasts of coronavirus ‘ratings’ as top expert warns of up to 200,000 US deaths
5 Maureen Dowd: Coronavirus has made a national shrink of Andrew Cuomo
Real news has value SUBSCRIBE