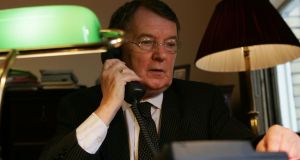 Dr Brian Farrell said that CSO data uses coroner data but that it should be possible to apply the balance of probabilities or clinical test in researching statistics to provide a more accurate count on the number of suicides every year. File photograph: Cyril Byrne

Official statistics on suicides are not accurate and should include deaths where suicide is considered on a balance of probabilities, former Dublin City Coroner Dr Brian Farrell has said.

Dr Farrell said that a new study by the Health Research Board and the National Office for Suicide Prevention on suicide should use the balance-of-probabilities standard as many coroners decide on a beyond-a-reasonable-doubt standard and leave open or undetermined verdicts on what are in fact suicides.

The trained barrister and pathologist, now a consultant coroner at the Dublin City Coroner’s office, was speaking at an information session on media reporting of suicide held in Dublin under Connecting for Life, an initiative bringing together various agencies in Dublin South East, Dun Laoghaire and East Wicklow.

According to Central Statistics Office data released last month, there were 425 deaths by suicide in 2015, the most recent year for which figures are available, down from 486 the previous year.

Dr Farrell said that CSO data uses coroner data but that it should be possible to apply the balance of probabilities or clinical test in researching statistics to provide a more accurate count on the number of suicides every year.

“I believe that then we will only really have for the first time some accurate information in relation to the suicide rate,” he said.

Sarah Woods, from the National Office for Suicide Prevention’s communications office, said that using the balance of probabilities would “give us a better understanding about suicide and the reasons behind that.”

Claire Sheeran, media monitoring officer with Headline Ireland, which advises the media on responsible reporting on mental health and suicide-related issues, spoke about the importance of journalists not reporting graphic details of the methods of suicide and self-harm.

“It is not really about censorship; it is about ensuring that copycat behaviour does not continue,” she said.

In a question-and-answer session, Detective Sergeant Patrick Keegan asked Wicklow East coroner Cathal Louth for guidance on whether gardaí should disclose suicide notes to the family of the deceased, noting that in one case an inexperienced garda withheld a suicide note from a family.

“The family was very distressed,” he said. “For eight months they didn’t know why their loved one had committed that act.”

Mr Louth replied: “The family should be made aware of the suicide note from day one.”

Rick Rossiter, a survivor of repeated suicide attempts, urged people to talk more openly about suicide saying that there had been “a wall of silence” in his own life and, in more recent times, until a fourth suicide in his daughter’s school.

He warned against the effect of bullying on children in “a new age of social media” and said that some people are misinterpreting how guidelines on discussion of suicide should work.

“For us people who have gone through suicide it is not a taboo word for us. It is not something that you should shy away from,” he said.

Mr Rossiter, an ambassador for Sea Change, the national stigma reduction programme around mental health, said that he had been dealing with mental health issues since he was 13.

He made his first suicide attempt at 15 and had to leave his hometown the following year because of “the stigma of it.” He was diagnosed as bipolar at 26 and with a borderline personality disorder at 36.

“My last attempt was 10 years ago,” he said. “Even though the doctors said that I will die by my own hands, I don’t think I’m going to because that is a challenge now for me.”

* If you have been affected by issues in this article, help and support is available from the Samaritans on freephone 116123 or or email jo_at_samaritans.org or Freecall Pieta House at 1800 247 247