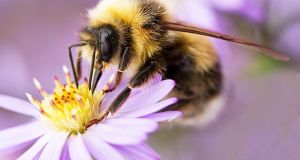 A total ban on bee-harming pesticides across the European Union has edged closer after the UK dropped its opposition, on foot of research confirming they are damaging pollinators.

UK environment secretary Michael Gove said the new evidence indicated the risk posed by neonicotinoids to bees and other insects is “greater than previously understood”.

The findings justify the further restrictions on their use which have been proposed by the EU, said Mr Gove, adding that the UK will maintain a ban after it leaves the EU.

Despite opposition from the UK and Ireland, the EU in 2013 banned three neonicotinoids for use on certain crops such as oilseed rape after authorities identified risks to honey bees.

Since then, the European Commission has proposed restricting neonicotinoids for use only on greenhouse-grown plants and to extend the ban onto sugar beet and winter cereals grown from neonicotinoid-treated seed.

The Department of Agriculture, Food and the Marine, which has responsibility for pesticide use in Ireland, said it would comment on the latest UK move in coming days.

Research last month found 75 per cent of the world’s honey now contains neonicotinoids, highlighting how widespread the pesticides have become in the environment.

Separate research revealed 76 per cent of flying insects in Germany’s nature parks have been lost in 30 years, while studies elsewhere show similar falls in other European countries.

However, NUI Galway lecturer in plant ecology, Dr Dara Stanley said she feared that farmers could turn to other harmful pesticides on which scientific knowledge is limited, if they are denied neonicotinoids.

Dr Stanley, who is an expert on the impacts on insecticides on bee behaviour, said it was reassuring to see the UK take “an evidence-based decision”.

Neonics are used on Irish arable and tillage farms, especially on oilseed rape. Bee numbers in Ireland are falling, she said, and some bumble bee species are now less widespread than before.

However, there is insufficient data on the level of the pesticides in the Irish environment, Dr Stanley said. Farmers should move to using less pesticides, or find alternatives. But more research is needed, she said.

Jane Stout, professor in botany at Trinity College Dublin, said: “We can’t just replace neonics with something similar. Drenching countryside in persistent insect poisons contributes to the massive declines which have been reported recently.”

“This was thought to be better for the environment. But with the good old law of unintended consequences they were having more insidious effects,” Prof Stout explained.

Neonicotinoids target the nervous systems of insects: “They’re used in a prophylactic way – like a vaccine – rather than to manage outbreaks of pests, so they’re actually in the entire plant rather than just sprayed on top of it,” she said.

However, they find their way into wild plants, drainage ditches, ponds and rivers poisoning wild insects,cutting their ability to breed “and confusing them so they can’t find their way home”.

Last July, Prof Stout said the world must increase food production, protect the environment “while ensuring farmers can make a living, but without trashing ecosystems.

“Part of this rests with politics: agriculture and the environment are dealt with separately by governments, and yet they are two sides of the same coin,” she wrote in The Irish Times.

Saying that the UK’s total ban is the only way to remove neonicotinoids, University of Dundee neurobiologist Dr Chris Connolly, said the vetting of pesticides must be improved.

“[It] demonstrates the key flaw in the process of evaluating the safety of chemicals. Allowing 20 years of unrestricted use prior to the evidence becoming available is not an effective approach,” he said.