High hopes: Sometimes school is not enough to help young people get a job 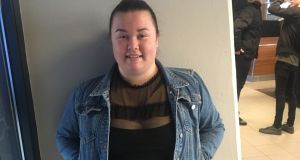 Kristy Hubbard (20) from Finglas: “I was scared about starting Leap but, after some encouragement, I decided to give it a go and it’s been great for me.” Photograph: Seán Dunne

Paul Flood quit school just weeks before he did the Leaving Certificate three years ago. Everything had become too much.

“The pressures got on top of me and I decided to leave. I walked out in frustration but I have regretted it ever since,” Flood says. “I was lying awake at night worrying about where I would get a job – that’s something no young person should have to do.”

Today, the 21-year-old from Dublin’s North Wall is one of 12 young adults from the north inner city who have successfully completed a programme that helps to prepare them for getting a full-time job, and for keeping it.

“I got a three-week placement in construction and I absolutely loved it. It thought me how to work in a fast-paced work environment. While there wasn’t a direct job there when I finished, hopefully in the next six months, I’ll be starting as an apprentice there,” Flood says.

Known as the Career Leap (local employment action partnership), it bids to build self-confidence among its charges. It helps, too, to prepare them for turning up on time and for communicating properly when they are there.

Minister for Finance Paschal Donohoe and Minister of State for Finance Michael D’Arcy on Thursday joined celebrations when the dozen young people were recognised for the work they have put in.

The Leap programme, aimed at 18 to 24 year olds, was developed by Prof Carmel O’Sullivan of the school of education at Trinity College and her colleague Dr Jennifer Symonds of UCD.

Unlike Flood, Kristy Hubbard did finish her Leaving Certificate. “I don’t have much confidence and never have. I was scared about starting Leap but, after some encouragement, I decided to give it a go and it’s been great for me,” she says.

“I went in with nothing and have come out with loads. I want to set up my own little beauty business in a retail shop – that’s my dream. My family believe in me and are supporting me every step of the way.”

Marie O’Reilly from East Wall Youth Group has worked for years with young locals. “Sometimes we think in the back of our mind that we are giving them a chance but that is not the truth. It is the young people who give us a chance to become part of their lives and help them move forward sometimes in very difficult situations,” she says. “[They] are the gold stars, not us.”

Currently, Leap is funded by the City of Dublin Education and Training Board and local businesses, included A&L Goodbody, whose headquarters lie little more than a half-mile away geographically, but a million miles psychologically.

“For us, the Career Leap programme is a great one for us to participate in because of the pretraining the young people get,” says Goodbody corporate responsibility manager, Sinead Smith.

“They do learn the softer skills needed to come into a work place. Young people getting those skills before entering the work force mean they are less nervous coming into us and a great relationship can be formed.”