Of course it is: Forecasters say rain is on the way 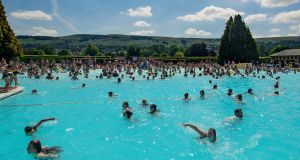 Heavy rain is expected in the early days of next week to end the recent spell of good weather.

A band of rain will will spread from the southwest on Monday evening and cross the country.

In the meantime the hot and humid conditions across the country will continue with highs of 24 degrees in the east on Wednesday and 25 degrees on Thursday.

It will remain pleasantly warm on Friday, although temperatures will be slightly down on recent days with highs of 22 degrees. The weekend will be a mixed bag with a lot of sunny weather but rain in parts of the south and west.

While it has been pleasantly warm in Ireland, it has been dangerously hot across parts of continental Europe.

Bordeaux recorded its highest ever temperature of 41.2 degrees on Tuesday, and forecasters in France are expecting temperatures in Paris on Thursday to break the record of 40.4 degrees, which has stood for 72 years since 1947.

Belgium has issued a code red warning for the country with temperatures reaching 39 degrees in the centre of the country.

There could also be record temperatures in Britain with the possibility on Thursday of London recording its hottest-ever day. The previous record stands at 38.1 degrees from August 2003.

The UK’s Met Office has predicted 39 degrees on Thursday in parts of south and eastern England. It has put the chances of the record being broken at 60 per cent depending on the amount of cloud.