Nurses to begin ballot for strike action over pay on Monday 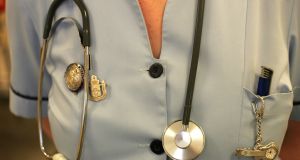 INMO argues its members are paid about €7,000 a year less than staff in therapy grades but work more hours. Photograph: Frank Miller

The State’s largest nursing union will commence a ballot of members for strike action on Monday following the rejection of Government pay proposals.

The ballot of members of the Irish Nurses and Midwives Organisation (INMO) will run until December 13th. If the ballot is passed the INMO has said nurses could engage in a number of 24-hour stoppages in hospitals.

Nurses are campaigning for an across-the-board pay increase to address the issues regarding unions seeking pay parity with groups such as physiotherapists and speech and language therapists. They argue that their members are paid about €7,000 a year less than staff in therapy grades but work more hours.

Last week the trade union Fórsa warned the Government that it would face pay claims by other healthcare staff if it provided additional pay increases to nurses over and above those set out in the current public service agreement.

The Public Service Pay Commission found in a report in September that there was no generalised recruitment and retention problem in nursing and midwifery, although it highlighted localised difficulties.

The Government – based on the commission’s recommendations – put forward a €20 million package aimed at dealing with the issues including increased allowances and faster access to promotion. The Government said 18,000-20,000 nurses could benefit from the proposals.

Some nurses could also benefit from a separate initiative to address the two-tier pay system in the public service under which staff recruited since 2011 are paid less than longer-serving colleagues.