Taoiseach says whistleblower case against Martin Callinan may not be defended 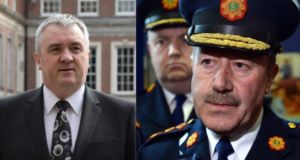 The State’s provision of legal representation to former Garda commissioner Martin Callinan in the Garda whistleblower case does not mean the State will pay for a defence, the Taoiseach has said.

Leo Varadkar said it did not even mean that there would be a defence to the case taken by Sgt Maurice McCabe against the former commissioner who the Disclosures Tribunal concluded had conducted a smear campaign against him.

He also said the Government is considering whether it can pursue Mr Callinan and former Garda press officer Supt David Taylor “for a contribution to any damages that may be paid”.

The tribunal found Sgt McCabe to be an exemplary officer and that the former commissioner and Supt Taylor engaged in a “campaign of calumny” against him.

Mr Varadkar said it was also open to Mr Justice Peter Charleton as head of the tribunal “to pursue a similar process in relation to tribunal costs should he feel those witnesses or any witnesses did not fully cooperate with the tribunal.”

“It’s important to say on the record of the Dáil that State representation does not constitute any undertaking or a grant of indemnity,” he said.

The Taoiseach told Sinn Féin leader Mary Lou McDonald; “I would like to see the case settled and I hope it can be settled to the satisfaction of Maurice McCabe and [his wife] Lorraine sooner rather than later”.

The Government is reviewing the granting of legal representation, which was given in July 2018 before the Disclosures Tribunal investigating the issue reported.

Ms McDonald raised the case after it emerged that the State had granted legal representation to Mr Callinan who had “repulsively denigrated” Sgt McCabe and who “went around telling people falsely and without any justification that Maurice McCabe was a child abuser”.

She acknowledged that in a normal case a public servant would be granted representation but “this is not a normal case” and “he should not get one red cent”.

Ms McDonald said the State “has already failed Maurice McCabe on numerous attempt and now the State looks set to support the individual who destroyed his character”.

The Taoiseach said “the tribunal has made findings and that allows us to review the position and the position is being reviewed at the moment”.

Mr Varadkar again acknowledged that service Sgt McCabe had given to the State and said “it is really sad to see that in our public service that when somebody points out when something is wrong their own peers turn on them.

People Before Profit TD Bríd Smith called for a debate on the issue and Minister for Justice Charlie Flanagan said he was open to such a debate.