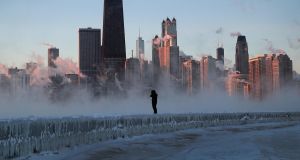 A man walks along an ice-covered break-wall along Lake Michigan, Chicago, while temperatures were hovering around -20 degrees on January 31st. Photograph: Scott Olson/Getty Images

The freezing temperatures in the United States and intense heat in Australia that were witnessed this week both have their origins in climate change, according to two Irish scientists.

Emeritus professor of geography at Maynooth University John Sweeney and director of the Icarus climate change unit at the college, professor Peter Thorne said it was becoming more evident that extreme weather events were linked to climate change.

Prof Sweeney, who contributed to the Nobel Prize Winning Intergovernmental Panel on Climate Change, says we are likely to see the evidence of climate change in every extreme weather event, across the globe.

He said the amount of energy being trapped in the atmosphere was the equivalent “of one or two Hiroshima bombs per second”. All that energy was bound to have an effect on climate, he said.

According to Prof Sweeney events in the upper atmosphere were causing the jet stream, which is an air flow going from west to east, to “lurch north and south”. When it lurches south it brings cold polar air further south and when it lurches north it brings warmer, tropical air further north. He said this was why extremes of cold that are now being experienced in the US can be seen to be related to extremes of hot weather like Europe experienced last summer.

Parts of the US faced colder temperatures than Antarctic this week as a polar vortex saw cold air of minus 40 degrees moving in from the Midwest to New York and the east coast. In Chicago, people were warned of the dangers of getting frostbite on exposed skin as social media carried images of wet hair instantly freezing and hot water thrown in the air turning immediately to snow.

Meanwhile in Australia record breaking heat saw wildfires rage and temperatures of 47 degrees were recorded Adelaide for the first time.

US president Donald Trump tweeted on Monday: “In the beautiful Midwest, windchill temperatures are reaching minus 60 degrees, the coldest ever recorded. In coming days, expected to get even colder. People can’t last outside even for minutes. What the hell is going on with Global Warming ? Please come back fast, we need you!” Shortly after the official US National Oceanic and Atmospheric Administration responded with a tweet of its own: “Winter storms don’t prove that global warming isn’t happening.”