Number of people listed as homeless falls to four-year low 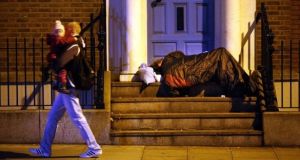 Ten people who were rough sleeping have died this month, including six in Dublin. Photograph: Dara Mac Dónaill

The number of people registered in the State as homeless is at the lowest level in four years, according to new figures.

Almost 1,500 people exited homelessness during the period covered by the lockdown, the figures show.

The monthly homeless report for the second quarter of 2020 (from April 1st to June 30th) shows 1,467 adults and their dependants secured rented accommodation and are no longer listed as homeless.

The monthly report for June also shows that 8,699 individuals were accessing emergency accommodation in June, a reduction of 177 compared to the May report.

This is the lowest level since August 2016.

However, the latest figures come against the backdrop of the death of 10 people on the streets in less than a month, including six in Dublin.

On Thursday morning a young homeless man was found in a car park at Drury Street.

Minister for Housing Darragh O’Brien said the homeless figures were “simply too high,” despite the recent reduction.

He said progress had been made to help homeless people secure secure a tenancy and this had reduced the numbers accessing emergency accommodation.

Mr O’Brien said he wanted to source more one-bedroom homes as 70 per cent of those registered as homeless were single adults.

Focus Ireland also welcomed the reduction but warned that new rental legislation, passed by the Government on Friday, will lead to a “new surge in homelessness”.

The charity’s director of advocacy Mike Allen said the legislation neglected to deal with the largest single cause of family homelessness; evictions to allow landlords to sell or to replace the tenants with a member of the landlord’s family.

National spokesman Wayne Stanley said: “This will see more families having to enter homelessness in the months ahead, reversing the really progressive trend we have all worked so hard to achieve in the last months. In turn, homeless services will be stretched given public health requirements around social distancing.”